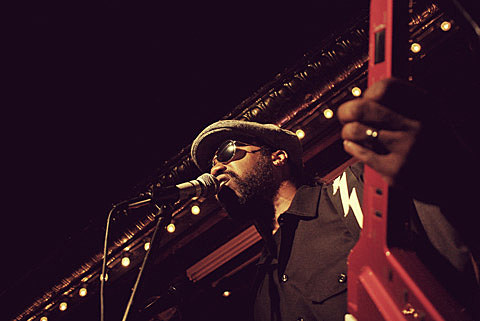 Dam-Funk will be in NYC this month for Northside Festival, where he'll play the previously discussed Brooklyn Bowl show on June 17 with The Rub. At that show, he'll be debuting his new band, which includes members of The Mars Volta and Macy Gray's crew. Tickets for that show are still available.

Dam-Funk has also been added to the previously mentioned Onra show at Santos Party House (7/17), which also includes Taylor McFerrin, The Doppelgangaz, and DJ Sean Rowlands. Dam-Funk will be DJing at this show. Tickets for that show are still available.

He's also one of the openers on the recently announced Ariel Pink's Haunted Graffiti tour. He won't be handling any of the support duties on the east coast though. When we first mentioned the NYC show, which goes down at Webster Hall on September 14, we mentioned that TEEN and James Ferraro would be opening, though it appears that James is no longer on the bill and Bodyguard is instead (UPDATE: James Ferraro is Bodyguard). Tickets for that show go on sale Friday (6/8) at noon with an AmEx presale starting TODAY (6/6) at noon.

All Dam-Funk dates are listed below...