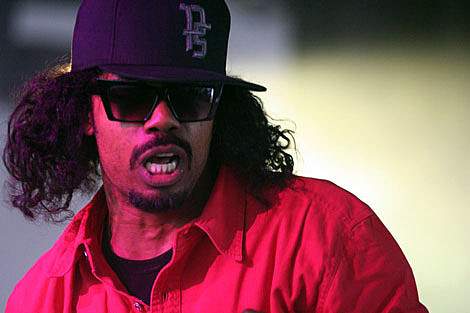 At Dam-Funk's set I saw during SXSW 2010, the foggy synths and sun-baked cassette jams of his Toeachizown LP, which came out last year on Stones Throw, blasted on an ear-crushing level. He also played a keytar. Videos of that gig and another Austin show are below.

Coming up, he has scattered tour dates all over the world, including Sasquatch and Pitchfork music fests this summer, and an NYC show on a boat. Dam-Funk plays a Rocks Off Concert Cruise on Saturday, April 24th. Tickets are on sale.

All Dam-Funk tour dates and his cover of the Human League's "Things That Dreams Are Made Of" (and its accompanying trippy video) are below...

DaM-FunK covers Things That Dreams Are Made Of