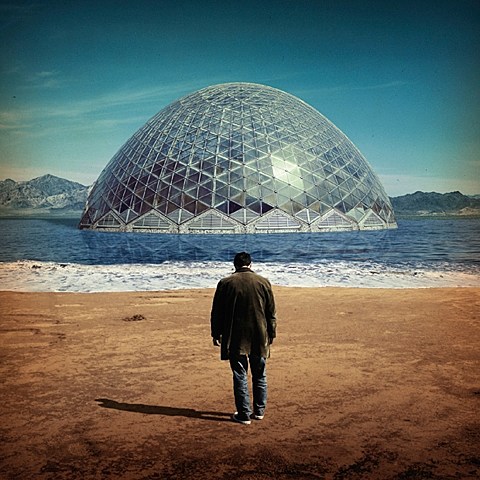 Seattle songwriter Damien Jurado has announced that the followup to 2012's Maraqopa, Brothers and Sisters of the Eternal Son, will be out on January 21 via Secretly Canadian. That's the album artwork above. You can check out the tracklist, along with a 6-minute album trailer and an essay by Father John Misty about the album, below.

Damien will be touring around the time of the record's release, and he brings that tour to NYC for a show on January 24 at Bowery Ballroom. Tickets for that show go on sale Friday (10/25) at noon. All tour dates are listed below.

Speaking of Father John Misty, in addition to his The History of Caves score which is being released on Record Store Black Friday, he also just contributed guest vocals to Texas producer Botany's new song, "Laughtrack," which you can stream below.

Damien is out of his goddamn mind.
This isn't a recent development, but it's an important aspect of his work that often goes ignored. In place of this key element is the idea that his music is a sober and in-depth excavation of the American landscape and rural psyche. Well, folks, I'm sorry, but it's not. In other words: there is no railway station east of Ohio.

Abandoned motels, barren highways, magazine killers, Chevrolets backing out of driveways in the middle of the night, wedding photos, intoxicated hands, bleary-eyed circus clowns, barstool salvation, yeah, yeah, yeah, we get it: "America." We'd all like to live there, but we don't. No one does. We're stuck with Jamba Juice and the internet, occasionally a charming, aesthetically pleasing dilapidated monument of the pre-Air Conditioned Nightmare on the side of the road. For a minute we can marvel and say "Wow, there's nothing out here!" Nothing except a huge fucking interstate freeway and a massive telecommunication network on which we can Instagram bucolic isolation.

Out there is nowhere, but inside is endless.
You know what else they have a lot of in "America"? Religion. Don't leave out that old-time relijun or your souffle of polite, revisionist, fantasy America is going to fall flat at the foot of the Cross. When "folk" comes up in their iTunes genre column, them lily-white champions of gravel-voiced, hard-won-wisdom-shilling, Millennial old-timin' expect some goddamn symbolic imagery, man! Not actual faith per se, I mean, c'mon now, what are you: fucking insane?

Damien Jurado is every character in every Damien Jurado song. He is the gun, the purple anteater, the paper wings, the avalanche, the air show disaster, Ohio, the ghost of his best friend's wife. It is a universe unto its own, with its own symbolism, creation myth, and liturgy. You might go as far as to call it a religion, and your religion is a character in his religion.

Level with me. You're reading this because of Damien Jurado's new album, Brothers and Sisters of the Eternal Son (produced by Richard Swift). You are a progressive minded, left-leaning person who in parlor-style conversation regarding the globo-political ramifications of Sky Person relationships laughs knowingly so as not to be judgmental and very reasonably concedes "Well, I don't believe He's some old man with a beard sitting up in the clouds" at which point everyone agrees on [insert benign middle-ground] and moves on.

Consider this: What if the only way to understand a religion is to create your own?

Who is this Silver community? Where the hell are they in the Bible? Is this heresy? Agnostic reference? Isn't this sun business a little, I don't know, animistic? Pagan? Go ahead and answer that question for yourself. I'll give you a second.

Do you understand the music any better?

Faith is like theater: it isn't meant to be read, or analyzed it is meant to be performed and inhabited. Upon being asked if he believed in Gawd or not, Norman Mailer replied, "Sure, why don't you and make him better?"

You know that adage we all use so we have something to say while we shrug our shoulders? "People change"? That one. Is that applicable to Jesus Christ? Maybe he's been on a personal journey of discovery since he ascended. He went through the 60′s, 70′s, he turned on, tuned out, got disillusioned. Why can't we talk about that Jesus? Does it have to be the old-timey one all the time? American folk Jesus, ugh. The one who's always winning Best Soundtrack Oscars for people. Rarely do stories of faith make us identify with Jesus. It's Abraham, Satan, Silver Timothy, Salome, Dr. J, Saul of Tarsus; divinely imperfect brothers and sisters who give Gawd something to do.

Damien Jurado made up his own Jesus because a Damien Jurado album needs a beautiful Jesus. Some freaky space Jesus that I don't recognize. The name is the same, a lot of the imagery is the same, but he's reborn. Born again, I mean. Yeah, as if Jesus got born again. That's what this album sounds like.

Jesus is out of his goddamn mind, and I want to live in Damien's America.