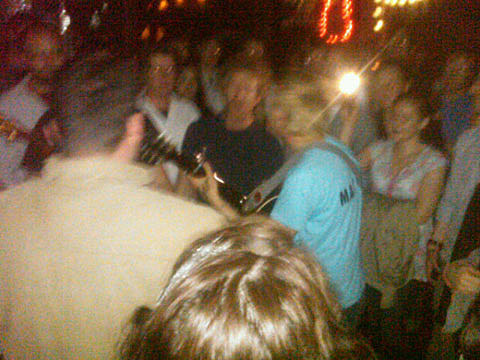 Damien Jurado and John Vanderslice started their two-night NYC run at Mercury Lounge on Thursday (5/12). They're at the Rock Shop tonight, and it's now sold out.

On this tour, Vanderslice - accompanied by Jason Slota on drums, keys and other things - has been inviting the audience to join him on stage. On his website he gives some examples of what might happen.

-You can sing lead or harmony vocal on "Trance Manual"
- You can play a solo on "Exodus Damage" with an instrument of your choice, the weirder the better.
- You can trigger that cool squiggly sound in "Underneath The Leaves".
- You can also choose your own adventure. Again, the stranger the better.

BV correspondent Jake Forney was there for Damien Jurado's set (and a small bit of JV's). His report and some videos of John and guests from earlier on the tour are below...

Damien Jurado is the kind of performer who unassumingly takes his seat onstage to the chatter of the crowd, almost unnoticed, but as soon as he starts playing the place falls silent. (I was worried that since he was the opener people were going to talk throughout the set.) He was his understated self, singing soft and sad songs. He was in a good mood, displaying his new "bling," three rings on his right hand, including one turquoise in honor of his grandmother (who's still alive, he made clear) and one with a bear claw in it. He also told an anecdote about how on the flight into NY, he sat next to a girl who was playing her music loud enough for him to hear it from her headphones, and she listened to an entire album of his and never knew that it was him sitting right next to her.

Joining him was a girl to sing harmony. Her name might have been Molly. She's in a band called Campfire OK. All the songs were beautiful, and he played crowd favorites "Ohio" and "Denton, TX." He closed the set with a song that was different than all the rest. (I can't figure out what it was.) He tuned down to Drop D to play this long, epic story about walking the plains "side by side, tall as trees" and out of body stuff - "when your soul leaves your body it'll give you a chill". It was the only song where he raised his voice from his usual near-whisper.

When Jurado mentioned that John Vanderslice was up next, he said that Vanderslice is very energetic and usually likes to have dance parties, so to be ready. Vanderslice played with just a percussionist at a drumset who also played some bass notes on a keyboard. There was a third mic set up, so I'm guessing someone joined them. Also, JV mentioned that they had so many surprises tonight that he had to write them down in Sharpie on the back of his hand; his hand was pretty covered in black (I left before he got to any of them). He also set 3 or 4 chairs on the stage, inviting people to come and sit on the stage.

He did have a lot of energy, especially relative to Jurado. He was kind of goofy too. He played a song called "Convict Lake," which is a true story about taking acid and going camping.-Jake Forney