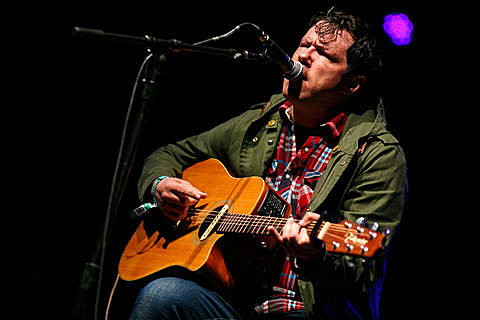 Damien Jurado announced late last year that he's releasing his twelfth album, Visions of Us on the Land, on March 18 via Secretly Canadian. Today he shared the second single off his upcoming LP, "Qachina," along with its video. The video was shot at California's Joshua Tree with a super 8, pairing the eeriness of Damien's vocals with an expert use of lighting.

In a statement about the video, Damien said:

"I really like seeing Jordan Halland's own personal visual interpretation of how he heard and envisioned "Qachina" as being. I think it really plays into what I have said all along about what, thematically, "Maraqopa" is, and what it may look like to other people. I recall the initial phone call with Jordan about the video, and it was very much like the same conversation I had with Brian Koch, who did the album's cover art.. 'I want this to be your thing. I can give you a few things to go off of, but really, what I want, is for you to hear the album, and give me your vision of what it looks like to you.'

Damien Jurado also announced North American dates of his tour in support of Visions of Us on the Land. The new shows are with Ben Abraham, and they include NYC's Music Hall of Williamsburg on June 1. Tickets go on AmEx presale Wednesday (2/24) at noon and general sale Friday (2/26) at noon.

All tour dates are listed, along with the video for "Qachina," below...