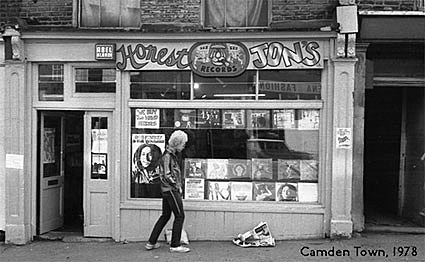 Making his Lincoln Center Festival debut former Blur frontman Damon Albarn, is joined by a host of diverse musicians from the UK, Africa, and the United States, for The Honest Jon's Revue, a musical "chop up" (Nigerian slang for "feast"). Albarn, co-founder of the virtual band Gorillaz, has gathered musiciansfrom his label, Honest Jon's, named in tribute to the landmark London record shop of the same name thathas been selling rare and obscure music to discerning buyers for 30 years. Under Albarn's musical stewardship, a wonderfully eclectic group of musicians--the Hypnotic Brass Ensemble, Simone White and Malians Kokanko Sata, Afel Bocoum and Lobi Traore--will play together and separately, for one show only on Saturday, July 12, in Avery Fisher Hall

Tickets are on sale (thx Bao). More details below....

Lincoln Center Festival 08 will present Damon Albarn & the Honest Jon's Revue, a splendidly diverse group of artists that has one thing in common: each has recorded for Honest Jon's, the independent London-based label. Damon Albarn, best known from his days in the rock band Blur and co-creator of the wildly successful virtual band Gorillaz, co-founded the Honest Jon's label in 2002 with the landmark record shop on Portobello Road that has been selling rare and obscure music to discerning buyers for 30 years.

Eclectic evenings of musicmaking have been in the Lincoln Center Festival mix since its early years. The Festival has presented a wide variety of world fusion, hip hop, jazz, and pop music--including traditional and contemporary music from North and South Africa, Latin America, and the Middle East--in addition to showcasing artists as diverse as Elvis Costello, Wyclef Jean, Ornette Coleman, Goran Bregovic, and Youssou N'Dour. Along with the record label, Albarn--who appeared in New York last year with his new band, The Good, The Bad, and The Queen--serve as musical curators of the Honest Jon's Revue, which has been called a "chop up," Nigerian slang for a feast of great music. In the dance music culture at large,

it means juxtaposition and reconstitution. For one night only, these wonderfully eclectic artists will play together and separately, as the spirit moves them, from the magical Malian blues of Lobi Traore to the blazing brass of the Hypnotic Brass Ensemble.

Singer-songwriter Damon Albarn gained fame with the rock band Blur, and was also co-creator of the cartoon gang band Gorillaz. In 2007, he collaborated with his Gorillaz partner Jamie Hewlett on Monkey: Journey to the West, an opera based on a Chinese legend, directed by Chen Shi-Zheng, whose productions of The Peony Pavilion, The Orphan of Zhao, and The Night Banquet were highlights of previous Lincoln Center Festivals. Albarn co-founded the Honest Jon's label in 2002.

Afel Bocoum, another key collaborator on Mali Music, comes from Niafunke, in northern Mali. Bocoum worked with Ali Farka Toure for more than thirty years, making a fundamental contribution to the distinctive--a and very popular--Niafunke sound.

Kokanko Sata plays and sings her own songs in a voice like "Nina Simone at her best" (Independent on Sunday). Her skill on the kamelen n'goni-the three-stringed hunters' harp usually reserved for the men of the village, and notoriously difficult to play--has brought her the nickname "the hunters' heroine." Her first, self-titled album was released on Honest Jon's in 2005.

Lobi Traore, the so-called "Bambara bluesman," began his association with Honest Jon's during the sessions for Mali Music in 2001. His self-titled album for the label was praised by The Wire as "a terrific set of garage blues party music... far from the soporific tastefulness of the African World Music coffee table scene."

Simone White was born in Hawaii and spent time in Seattle, New York, Paris, and London before moving to Los Angeles. Her first release for Honest Jon's, I Am The Man, is a collection of soulful folk tunes, recorded in Nashville with Mark Nevers (Lambchop, Will Oldham, Silver Jews).