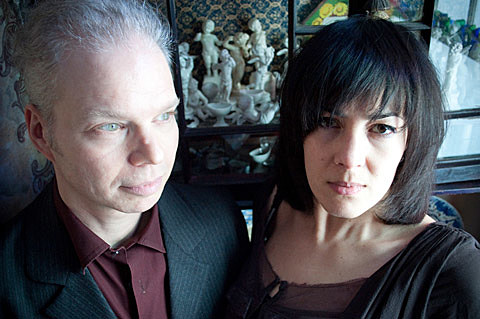 Damon & Naomi will add to the embarassment of Record Store Day riches by playing a free show at Sound Fix in Brooklyn on 4/16 at 7PM, AND releasing a limited 7" featuring "Walking Backwards" with a cover of Scott Walker's "The World's Strongest Man" on the flip. Look for that limited 7" wherever new vinyl is sold.

The former Galaxie 500 pair are also headining out on a US campaign with Amor de Dias in May, adding Ghost/Boris axeslinger and frequent collaborator Michio Kurihara (Boris, Ghost) on some dates and saxophonist/arranger Bhob Rainey of nmperign on others. Look for Kurihara at their Brooklyn show on May 22nd at Knitting Factory. Tickets are on sale.

Damon & Naomi will be touring in support of their new album, False Beats and True Hearts, which is out 5/17. Download "Walking Backwards" and "Shadow Boxing" from that CD above. Stream the same songs, and watch their new video, below.

Amor de Dias ("Love of Days") is the duo/supergroup of Alasdair MacLean (The Clientele) and Lupe Núñez-Fernández (Pipas). Their album, Street of the Love of Days, is also due 5/17. Their label is Merge Records, and Merge says:

"Over the course of three years, they quietly put together their debut record during evenings and weekends as they called in local friends (Louis Philippe) and visiting musicians (Damon and Naomi, Gary Olson) for sessions, building up the songs' multifaceted arrangements and vocal harmonies with harps, bouzoukis, strings, recorders, and brass over the core of dual Spanish guitars and the dream imagery of their bilingual lyrics.

The result is a focused, cohesive jewel of chamber pop that reflects a little of Gal Costa and Caetano Veloso's elegant brand of bossa nova, a bit of Erik Satie's haunting night music, and a large dose of spooky psychedelic folk. But the beautiful harmony that sings throughout the record makes it all their own."

Try out "Bunhill Fields" from their album above.

Expect a bit of collaboration between the two duos on tour. All dates below...

Damon & Naomi with Chris Marker - And You Are There