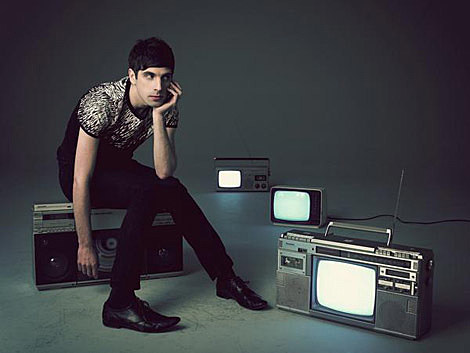 Paris-via-London artist Dan Black caused a stir (on the internet at least) in 2008 with "HYPNTZ," his inventive cover of The Notorious BIG's "Hypnotize" (mixed with Rihanna's "Umbrella") -- which later got him in trouble with Biggie's estate over use of the lyrics. So Dan wrote his own rhymes, and the song reappeared a year late as "Symphonies," which has one of the more expensive-looking (and admittedly cool) videos of the last year (and a remix by Kid Cudi). You can watch it below. Some are calling him the male La Roux and that's not too-far off the mark, with production that is super-slick, but pretty clever at times too. Maybe you saw him at CMJ last year?

Black's debut album, ((un)), came out last summer in the UK and gets a belated Stateside release on February 16 and will be playing a few select North American shows in support, including a late show at Mercury Lounge on February 18 with Free Blood. Tickets are on sale.

A few videos below, including the original "HYPNTZ" and CMJ 2009 footage, and all Dan Black North American tour dates, below...