BrooklynVegan Mike was at The Osheaga Music Festival in Montreal this past weekend (September 2-3, 2006). One of his tasks was to interview Wolf Parade guitarist/vocalist Dan Boeckner. What he found when he arrived backstage was a beer-soaked Boeckner who had just been attacked by none other than G Love (of Special Sauce). Wolf Parade's Dante DeCaro and Dan's fiancee Alexei Perry were also there. They collectively talk about the fight, Handsome Furs (Alexei and Dan's new Sub Pop-signed side-project), Wolf Parade's new album, Win & Regine's old apartment, and more.... 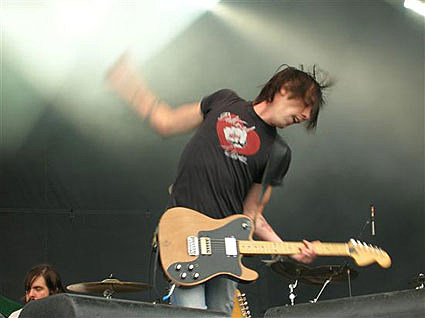 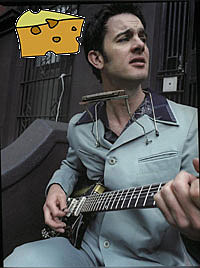 Dan: So, basically, G. Love, from the Special Sauce, they just threatened to kick my ass.

Dan: Because I threw cheese at them. And then they threw beer on me.

Alexei: and some cheese.

BrooklynVegan Mike: So, I take it you don't like their brand of funk/soul?

Dan: No. Not really. Like seriously, like these are white guys and he threatened me with a "beat down." And they are all like "man, he's not worth it." They are, like, holding G.Love back [laughs]. It was maybe the most surreal thing, like the whole time we have been playing in this band, that was literally the most fucking hilarious thing.

Like, seriously, could you imagine someone like G.Love being literally held back from giving you a beat down after he's been sitting in a chair playing harmonica.

BrooklynVegan Mike: So who do you think would win in a fight between your band and his band?

BrooklynVegan Mike: The set initially was beset with some technical problems. I know you just finished a west-coast tour. Was any of that a problem during the tour?

Dan: No. We got really, really rushed on stage. Islands ran over a bit and Ben Lee went over a bit so we were kind of like the pariahs [Note: the festival was operating on two alternating main stages]. They came down on us and they were like, "you got to go…..NOW," and we didn't get our shit properly sound checked.

BrooklynVegan Mike: Well you guys had the biggest crowd of the weekend so far and the crowd was hot. I've noticed, and you would know more than me, that especially at shows like this, the smallest thing goes wrong and it can take the entire set to get them back.

BrooklynVegan Mike: But you had the crowd the whole time. They were very patient.

Dan: Yeah. It's kind of sad because this whole tour we've achieved a level of professionalism, and this show takes us right back to square one by circumstance. It's kind of a bummer because we are fresh off a tour and wanted to deliver…the goods.

BrooklynVegan Mike: The album has been out for about a year or almost a year.

Dan: It will be a year in a couple of weeks.

BrooklynVegan Mike: Okay. Personally, and I'm sure more so for you guys, with the hype and everything else that preceded it, it seems like so much longer. I know this is an odd question for such a relatively new release, but do you guys have any future plans at the moment?

Dan: Yeah. We built a studio in Montreal. It is actually the apartment that Win and Regine from the Arcade Fire lived in. It was our first real practice space. We bought a mini mixing board from the CBC, some tape machines, and stuff like that. We're gonna start recording the new album plus side projects and other things. 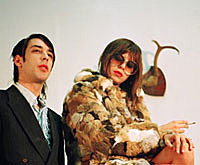 Me and Alexei, we just started another band called the Handsome Furs. We are gonna record our album this week. We're pretty much starting the day after tomorrow.

BrooklynVegan Mike: You guys are playing the Pop Montreal Festival next month, right?

Dan: Yeah. We are gonna play in Ottawa in a couple of days. Hey, man [Dante DeCaro walks by]. This is Dante DeCaro [guitarist, Wolf Parade].

Dan: Did you see his boys try to hold him back?

Dante: You got saucy with the Sauce, huh?

Dan: I got a little saucy [laughs][Dante walks away].

BrooklynVegan Mike: So what should a Wolf Parade fan expect from The Handsome Furs?

Dan: It's me and Alexei and a beat box, some keyboards and some guitars. It kind of sounds like the first Jesus and Mary Jane record.

BrooklynVegan Mike: I think you already answered my question but I was gonna ask what you thought of the festival so far?

Dan: I think it is gonna be one of the last festivals we do. We're gonna do Austin and a festival in Iceland, and I don't think we are gonna do any more festivals. We've pretty much decided today.

BrooklynVegan Mike: As a band, you decided that festivals aren't for you?

Dan: It's just a chicken run. It doesn't work for us. We need a good…all of our shit is so old we need like, 45 minutes to sound check and get it tight. We kinda learned that in the last year.

BrooklynVegan Mike: I know you guys decided it today but have you thought of the business impact a decision like that would mean? Radio festivals and such are a sort of necessary evil, are they not?

Dan: We were discussing that before we did this. Is it really necessary to do these festivals? If, as a band, you know you are only going to deliver a 75% show at a festival, maybe its better to play a headlining show at smaller venues.

BrooklynVegan Mike: Well, the old model was that every regional radio station had this control. And now that radio, for the most part, is dead or at least dying, you probably don't need to be held up to play these festivals.

Dan: Yeah. It's weird because we have never…there was a point with this band when we could have pushed promotional stuff much harder than we did but we just kind of stopped. I think the way the music industry works now is if you are on an independent label, or whatever you call Merge and Sub Pop [Wolf Parade's label]…a medium level label, with complete creative control and a good booking agent and you can book a good tour and make enough money and live modestly and not have to be a….not that I have any political bent about it…it's not like we're Fugazi or anything [laughs]. But there are things that make you feel really uncomfortable. There is a definite old guard from the late 80s/early 90s that believes that bands have to work in a certain way.

BrooklynVegan Mike: At the Vegan we are going to be starting a new column….

Dan: I read that blog.

Dan: Actually, I remember we played a show at CMJ and I think there was a review in the Brooklyn Vegan and it was like, "these guys were totally wasted." I have since stopped reading stuff on the internet but I read it and I was like, "Oh man" [laughs.].

BrooklynVegan Mike: We are going to start a column about Canadian indie music and I was curious what your feelings are on the difference, if any, that Canadians treat indie rock versus the States. Is there a difference?

Dan: I don't think so. I think people perceive a difference. People perceive this collectivism from Canadian bands but that's really because there's less people here. It also seems like, I know it's a shitty thing to say but, my favorite indie rock bands like Frog Eyes always jump to American labels because they have better distribution and there's more money to be made in the states. It's just a geographical fact. There was a leg of this tour, the Canadian leg, and it was eleven-hour drives.

BrooklynVegan Mike: Okay. I'll admit that I saw it as this collectivism. The piece I wrote talks about the CBC Radio 3 and how its like a national college radio station.

BrooklynVegan Mike: And it seems these bands that just started out get airplay on there and then the blogs might pick it up and the ball starts to roll, you know? So, what you are saying is that it is really just smoke and mirrors?

Dan: No, I mean it is in that we are smaller. There are less people here. The community itself that listens to it is smaller but at the same time I don't know if NPR covers bands like that.

BrooklynVegan Mike: They don't. Some of the shows have some great musical directors and sometimes you will get great bands like One Mile North or something as a bumper between segments, but they don't have eight hour plus shows dedicated to just great music.

Dan: I think maybe it is just more a socialist mindset. The CBC for the last couple years has been constantly on the verge of being tanked. We just elected a conservative government and the CBC doesn't generate money in their minds. But in terms of Canadian culture, f you want to get nationalistic, it's really the only thing going. It's not being filtered through any Toronto axis of watered down L.A or New York. It's just purely Canadian. And sometimes it sucks. The CBC is not consistently great but when it's good, it's really good. And they pay bands money. They will pay a band that has only done like three shows 1,500 bucks to come in and do a session. For us, when we did our first Radio 3 session, we had hardly played in western Canada at all and they paid us really good money and it helped us get to our next show. And I like that.

BrooklynVegan Mike: Congratulations on your nomination for the Polaris Music Prize. Now with things like this festival and the Polaris, do you think 6-7 years time it will be on the level of a Mercury or a Shortlist? Like a built-in shared cultural experience that appears in the U.K and the U.S.?

Dan: I hope so. I really hope so. I think right now there is a lot of attention because it is the tail end of the whole Canadian rock thing. But if it's sustainable, it will be very good for a lot of bands. We didn't really know about it, but they called Jonathan at Sub Pop and told him we were nominated.

Dan: Yeah. Not bad. [If we win], we are gonna pay to get our friend kidnapped and mildly tortured. Not with any serious injury but we really are gonna scare the shit out of him. And with the rest we will start a free festival in British Columbia, with Black Mountain and Pink Mountaintops and Chad VanGaalen. We want to start up a free music festival.

Dan: It will come out karmically equal. 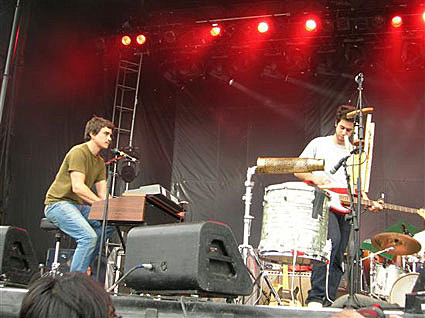