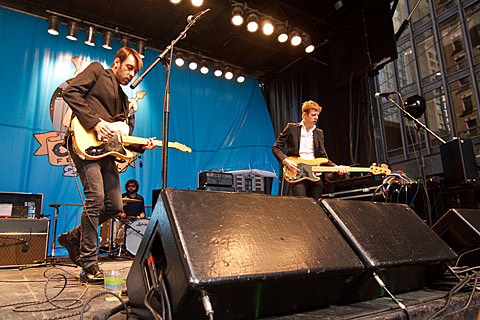 As Divine Fits members Britt Daniel (of Spoon) and Dan Boeckner (of Wolf Parade) told NY1 backstage at the recent Divine Fits show in Times Square, Dan and Divine Fits drummer Sam Brown are apparently working on yet another project called Operators. Dan also told CBC about this new band all the way back at Coachella...

"It's a real mix of like electronics and lots of live drums and guitar. I'm kind of tapping into my ... I listened to a lot of Fugazi when I was a kid, so it's that plus my love of New Order. That's kind of how it's shaking up."

And the 35-year-old has no intention of slowing down any time soon.

"I feel lucky to be able to be creative for a living. That's a luxury, considering the economy is in the toilet. If I get tired and I'm at the studio and I'm like, 'Oh God, it's three in the morning, I've got to finish this song,' I'm like, 'Well, at least I'm not working at a telemarketing company any more,'" he said.

...the Wolf Parade alumnus confirms that he's already begun demo sessions for the previously hinted-at project at his current home in San Jose, and he's recording the material on a recently acquired Tascam 8-track from the '80s.

"I found one in the box for $100 with the original manual -- the manual's explaining tape technology. It's pretty great," he says.

"Operators is becoming more and more a combination of everything I've done since i started playing music professionally," he explains. "There's elements of punk rock, which I've always loved, though that's a pretty broad genre."

Meanwhile, Sam Brown is getting back with his band New Bomb Turks for a show at The Bell House in Brooklyn on 1/18/14. Tickets are on sale now.

Divine Fits have nothing else coming up at the moment, but also recently played the first weekend of ACL and a last minute show at the Parish in Austin after their show scheduled for the 2nd week of ACL was cancelled due to rain. Like the CBGB Fest show in Times Square, that small Austin one was free.