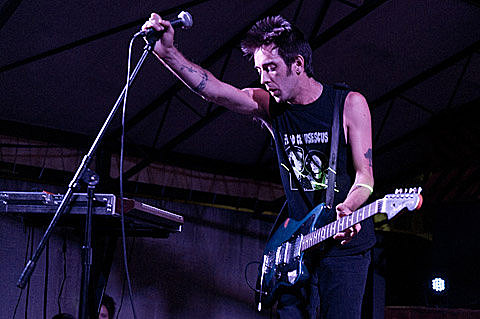 Brooklyn's Northside Festival is just around the corner (June 12-15) and we're proud to last-minute-announce that the official BrooklynVegan showcase will happen on Friday the 13th at Baby's All Right. It's an early show (8 PM doors, over by 11), and will be the NYC live debut of Operators, the new band of Dan Boeckner (Wolf Parade, Handsome Furs, Divine Fits) with his Divine Fits bandmate Sam Brown (also of New Bomb Turks) and Devojka. There's two openers TBA, and $15 advance tickets are on sale now. Limited Northside badges also welcome. 21+.

Devojka (of Operators), Meredith Graves (of Perfect Pussy) & friend (via) 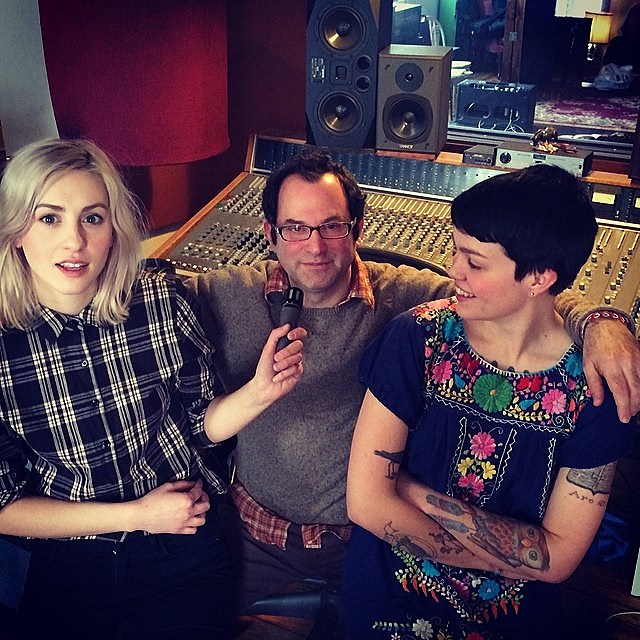 Operators, whose upcoming album will have guest vocals from Perfect Pussy's Meredith Graves (picture from the studio above), played their first-ever show this past November in San Jose, and last month they made their Canadian debut during Canadian Music Week. One of their shows was at the Silver Dollar which The Toronto Star caught and wrote:

Operators, rounded out by enigmatic Macedonian electronics whiz Devojka, came into CMW hard, though. The trio's first, utterly blazing midnight set at the Dollar on Thursday left a representative sample of Toronto's music-industry intelligentsia -- label reps, promoters, festival programmers, publicists, bloggers, critics and jaded scenesters in general -- tizzying about in a froth of unanimous excitement this writer has rarely witnessed in his two decades on the job.

Operators slayed, in other words. I went back for the other two shows just to make sure I wasn't delusional, and I wasn't alone. There were numerous fellow "three-peats" in the room on Saturday, and by then pretty much every friend with whom I'd witnessed the first show had returned for a second taste with at least one other friend in tow. Clearly, Operators were the CMW band to beat this year.

That show was also the one where fellow Canadian band Japandroids joined Dan Boeckner & co. joined them for a cover of Wolf Parade's "This Heart's On Fire." You can watch a video of that, with a video of one of their original songs, below.

Dan was also recently interviewed by Noisey, and discussed the new band's sound:

My main impression of Operators' sound is how direct and immediate it is. It's really hook-heavy. Of course your past projects have been pop-oriented to varying degrees, but this seems like a more aggressive step in that direction. Why did you decide to go down that route?

I felt like I needed to push myself after the Divine Fits record. I really liked that record, and there was a vibe to it, but given what was going on in my personal life when I recorded it... the songs that I contributed to that record were really dark. I toured the record and I cheered up a lot. With Operators, the gear lends itself to repetitive grooves, and I've always loved pop music. I was like, okay, I'm going to push myself with the vocals and the melodies of these songs. If we're going to have the same bass line running through this song, we're going to need a keyboard hook in it, there needs to be a vocal hook in it, and it needs to be really, really direct. It needs to be immediately accessible. I just really didn't want to make a record that was ponderous, like a think piece record. I wanted to make something that people could dance to, that had a ton of weird, noisy crap going on, but at its core was pop music. That's what I wanted with the band. We experimented with s lot of different formats, and this is what we hit on.

The band also have an upcoming appearance scheduled for Sled Island.

Watch those videos below...

Operators + Japandroids - "This Heart's On Fire" at Canadian Music Week 2014