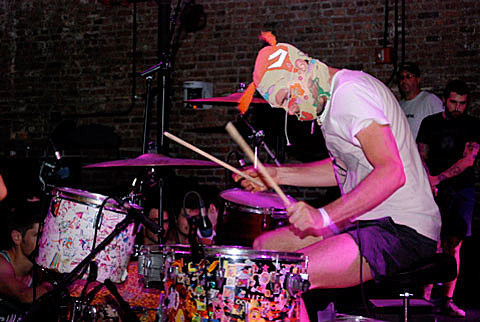 Lightning Bolt and the Dan Deacon Ensemble will play a string of dates together that kick off in Lexington, Kentucky, and end a week later, 10/15, at Ridgewood Masonic Temple.

In between and before those dates both Dan Deacon (NOT Ensemble) and Lightning Bolt have scheduled solo outings, with DD also scheduled to appear at the Incubate Festival in Tilburg, NL AND Moogfest in Asheville NC over Halloween weekend. The stacked lineup at Moogfest will feature Big Boi (who plays NYC next week), El-P, Girl Talk, Devo, Jonsi, Massive Attack, MGMT, Panda Bear, RJD2 (who just played Webster), and many others over its three days. Tickets are on sale.

Lightning Bolt bassist Brian recently played NYC with Megasus at Acheron, and before that LB played Brooklyn Bowl instead of Williamsburg Waterfront.

All Lightning Bolt and Dan Deacon/Ensemble dates, as well as few videos that include New Dan Deacon songs played live at Whartscape and a short documentary piece on Deacon/Wham City/Baltimore, below...

Lightning Bolt Live at the Mohawk