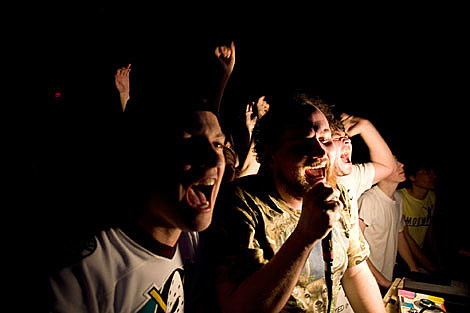 Dan Deacon and his ensemble kicked off their current tour at NYU in April. and now they're back for three NYC shows this weekend. The first, which previously had a TBA location, will be happening in Brooklyn tonight (5/15) at 979 Broadway Backyard (map). Todd P writes

The second (early with Teeth Mountain opening) and third (late with Future Islands opening) shows are both at Bowery Ballroom on Saturday night (5/16). Both appear to be sold out.

Dan Deacon played with So Percussion at the Brooklyn Masonic Temple show on December 11th, 2008, with the Dirty Projectors. On Friday, May 22nd, So Percussion are scheduled to premiere a new piece by Dan Deacon at Galapagos in Brooklyn. That composition, still a work-in-progress, "may include pouring liquids onstage, amplified coke bottles, and other oddities..." The show is part of the Undiscovered Islands series (which presents a show with violist Nadia Sirota and others, tonight/Friday).

Full lineup for the Friday night Dan Deacon show below...

we've got an amazing rainout location hooked up directly across the street
in that gorgeous old neoclassical bank building "martial arts studio" @
Broadway & Stuyvesant. It'll be phenomenal rain or shine!