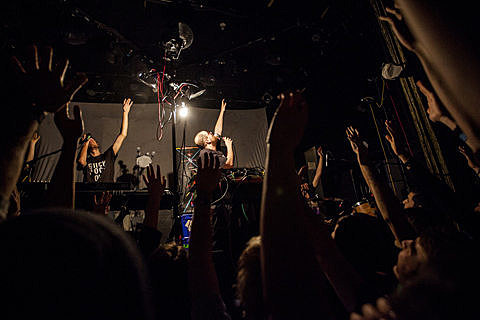 Dan Deacon made his national network television debut last night (12/13) on Jimmy Kimmel Live, playing "True Thrush" from his most recent album, America. Like at his live shows, Dan and his band played mostly in darkness and incorporates an iPhone app into his crowd-participation antics. You can experience a little of that symbiosis in the video from the Kimmel performance which has an interactive element, which you can watch below. Dan's North American tour wraps up this weekend in Florida and he'll head to Europe in February for a short tour there. All dates are listed below.

Meanwhile, Dan gave us his Top 10 LPs of 2012 which includes Baltimore pals Ed Schrader's Music Beat, Beach House, Dope Body, Chester Endersby Gwazda (who Dan brought on tour with him this year) and Horse Lords. You can check it out below, along with a list of tour dates and the 'Kimmel' video.