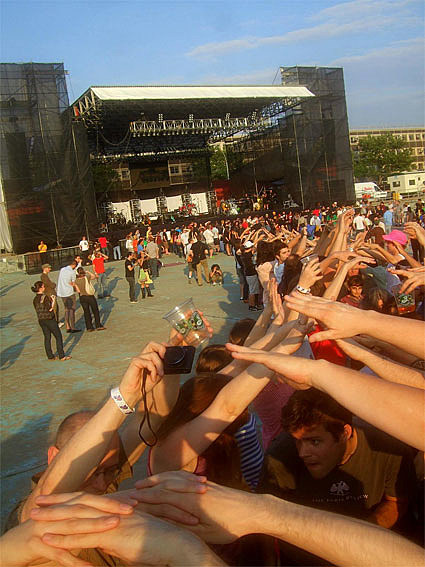 Dan Deacon returned to McCarren Pool in Brooklyn last night - this time as the opener for Devo and Tom Tom Club (June 26, 2008).

The curfew is 10pm at McCarren, so Dan had to go on at 6:30 pm. That was 2.5 hours before Devo took the stage at their early-for-a-headliner start time of 9pm (yes, that also means Devo only played for an hour). It goes without saying that the majority of the people who went to the show last night missed Dan's set. As you can see from the picture though, a decent amount of people actually did make it on time too.

And now that it's over, it can be officially announced that Dan Deacon is in fact the secret guest at Citysol on Saturday. There was a slight change in set times though. Dan will be headlining aka playing AFTER Ecstatic Sunshine. Also, it actually was supposed to be DD AND Dirty Projectors on the bill until DP had to cancel (Dan was not their replacement). More info at Citysol's site (P.S. it is FREE).