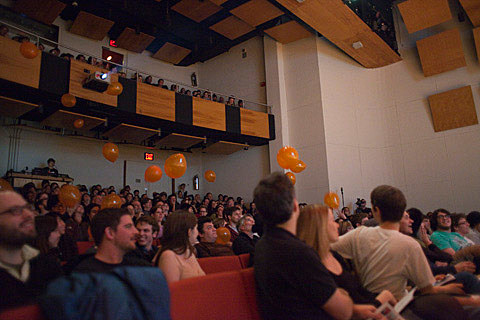 I was prepared to be disappointed by the Dan Deacon/So Percussion collaboration on Thursday night. I've seen Dan Deacon several times over the past few years and it has always seemed like more or less the same show ("Hey, it's that people-bridge thing."). With So Percussion, the last I saw of them was an evening-length piece at BAM titled Imaginary City. There the music was competently performed, but presentation was underwhelming; the ensemble got swallowed in their junkyard of instruments, too delicately played for the large theater space. My hope was that the group would be less calculated and more playful, which is when they're at their best, with Deacon (the amazing finale of their Matmos collaboration had them alternately chugging and playing beer cans).

Another reason to be skeptical: if you can remember back to May 2009, So Percussion described a Deacon-penned piece they'd be playing at a performance that month. An e-mail from the group warned that the piece "may include pouring liquids onstage, amplified coke bottles, and other oddities..." Well, it didn't end up coming together in time for the show. But it did last night. I figure, any project delayed more than two years is either a catastrophic trainwreck (Chinese Democracy) or a landmark breakthrough (Finnegans Wake or something). Part of that curiosity is what drew me to the show. 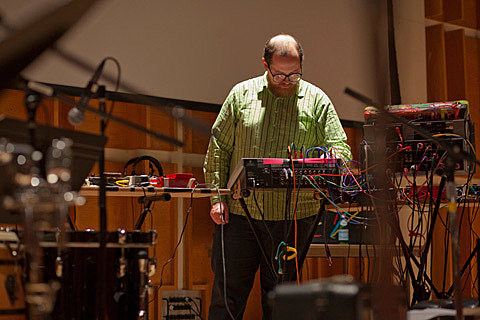 The night was divided into two halves, the first with So Percussion and Dan Deacon performing individual sets, then with the groups together. So Percussion's Jason Treuting was absent for the evening, off spending time with his new baby, who'd just been born two hours earlier, and substitute drummer Eric Rosenbaum did a great job of filling in. The band had the crowd sing "Happy Birthday" into a cell phone for the newborn, which was the first of several crowd-performances of the night.

Their opening set comprised of several short pieces, mostly based on videos submitted by friends: a bearded man using an electric toothbrush, a child playing with an orange balloon (replicas were thrown into the crowd to play with), and Martin Schmidt from Matmos looking very John Cage-ish, straight-backed and in a bow tie, playing a succession of musical objects into the camera. The ensemble improvised over the clips in meditative waves, aided by guitarist Grey McMurray.

Up next was Dan Deacon's solo set, which he didn't really perform in at all. In an obvious reach-out to prose scores (by John Cage and others I'm less familiar with) and aleatoric pieces like Terry Riley's In C, Deacon passed out a 24-step pamphlet with instructions for audience members to perform in their seats. The steps were to be repeated variously, before moving to the next in the sequence. Some instructions said to focus on breathing, others instructed you to sing a tone or scream, several involved using a cell phone, either to set off its alarm, create feedback with a neighbor's phone, or call a friend and have them sing to you (one stranger serenaded the near-silent hall to "Proud Mary"). The gambit paid off, both as a natural extension of the crowd-participation Deacon has previously employed and as a link to "new music" tradition.

There was an intermission, then "Ghostbuster Cook: The Origin of the Riddler," a collaborative piece with So Percussion, whose performance centered on drumming a row of soda bottles of varying sizes. They emitted a marimba-like sound that Dan Deacon manipulated with a row of effects. The next stop was a series of bass drums and congas, that sounded at times like a drum corps. When Dan Deacon fired up his sequencers, which took a few moments to lock in with the drums, it was the closest the night would get to a standard Dan Deacon set: overwhelming sound with chaotic execution (So Percussion didn't seem exactly at ease with their cues here). The group moved back to the pitched containers while members emptied more soda bottles into plastic tubs. Stoppers at the bottom of two playable bottles were let out and a misting sound filled the hall. Then, the silence. For what must have been more than ten minutes, So Percussion stood perched over their marimbas and vibes waiting for the running water to stop (no doubt a reference to the silence of John Cage's 4'33"). One enraged audience member exclaimed "Are you fucking kidding me?" before storming out the back. Then the water ended, and the group came in with an arrangement of twinkling mallet percussion, with a melody that hinted at Danny Elfman's film scores and polyrhythms that tugged in several different directions.

Was the night a success? Partly. Dan Deacon seemed serious about his concert hall debut; the prose score was fun and effective. So Percussion's solo set was a stellar example of what makes the group great: aural treats born out of playful experimentation. Their collaboration was a risk that had an admirable scope, and paid-off in parts, but stopped short of making a cohesive whole (again, the thing was called "Ghostbuster Cook: The Origin of the Riddler"). If Deacon and the group had put together a suite of short pieces, with spots to recalibrate and adjust, I suspect the result would have been a full success.

As it was, only one crowd member in a sold-out crowd leaving (as far as I could tell) is more than a minor victory. The biggest regret is the fact that the program's final piece, So Percussion's "I Love You, Goodnight," didn't happen. They skipped that song, possibly for time, or perhaps because Jason was absent, but I wish I had a video of it to post here: It's an amazing lullaby to send off an audience.

More pictures from the Ecstatic Music Festival show at Merkin Concert Hall (the next one is Craig Wedren, Jefferson Friedman & ACME on Saturday) below... 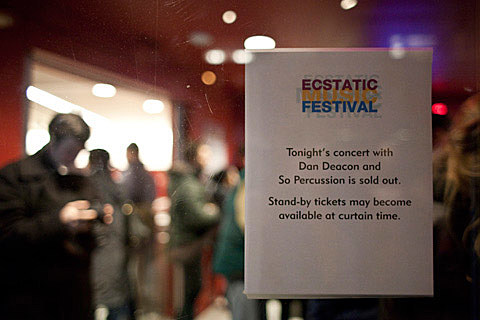 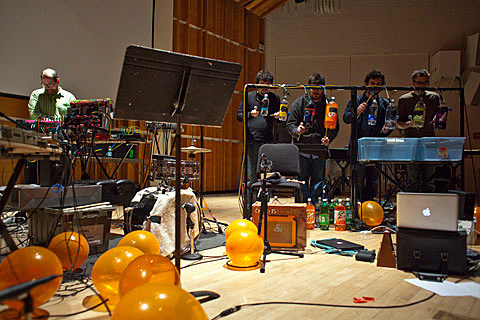 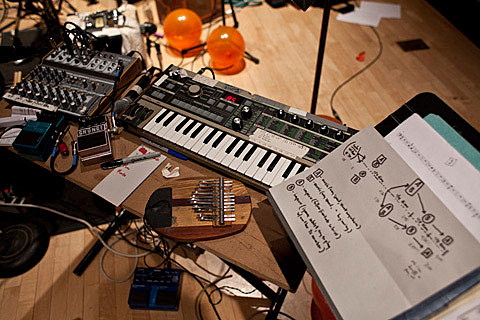 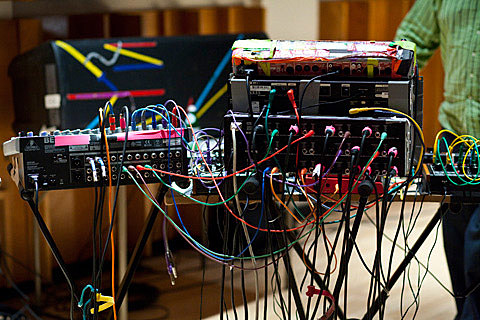 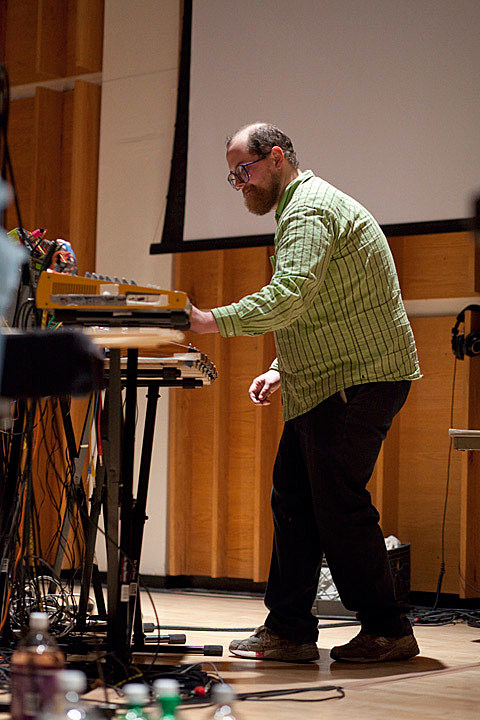 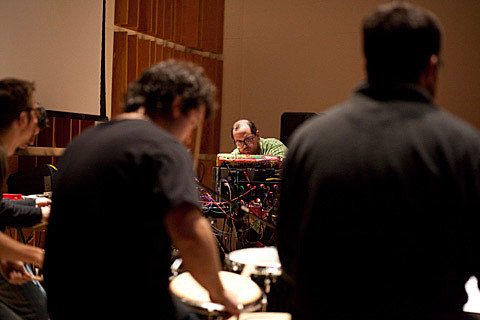 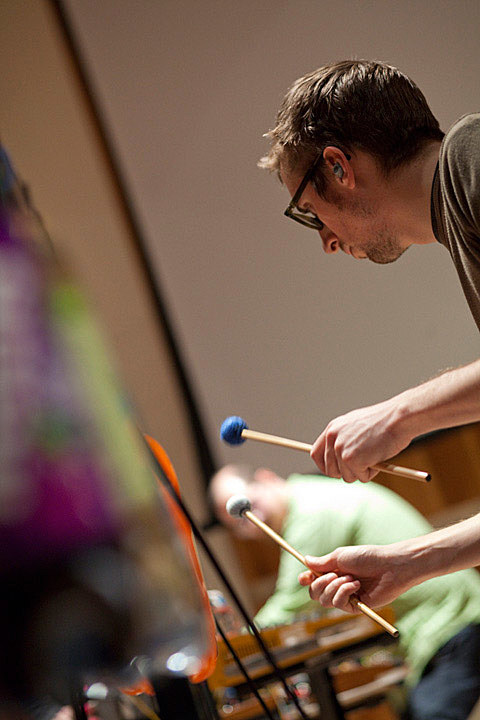 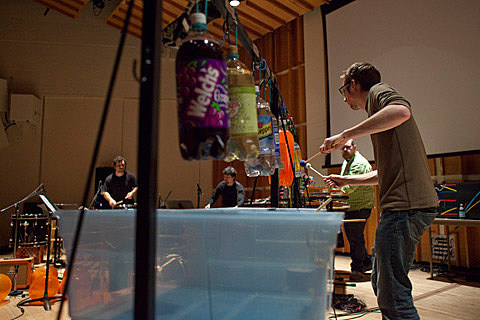 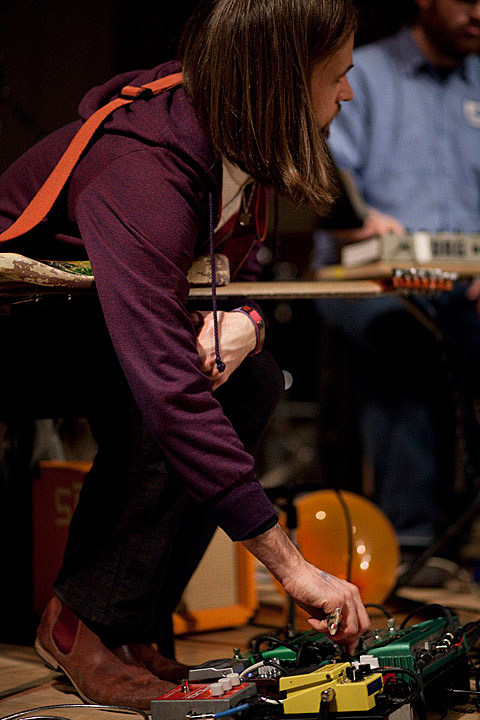 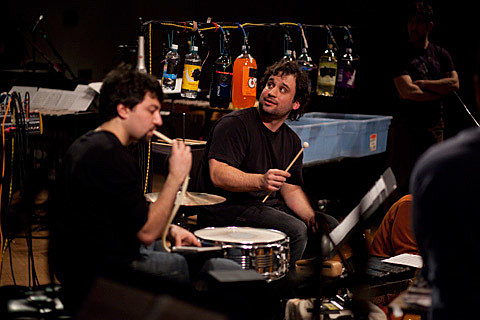 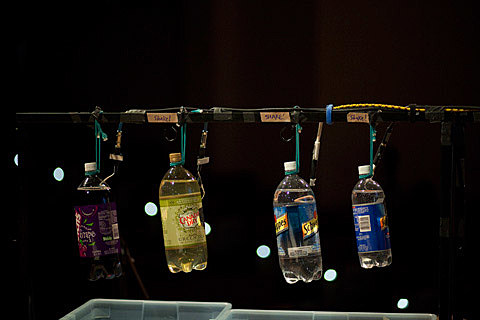 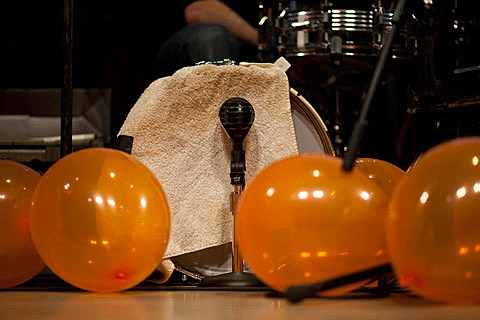 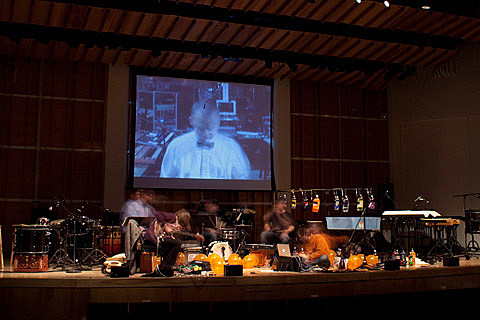 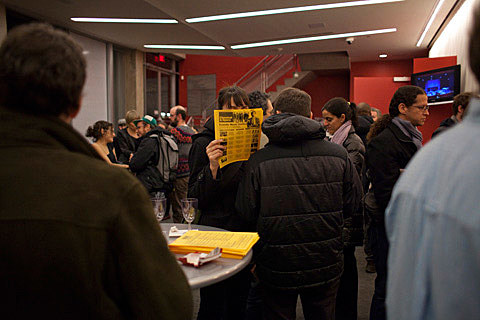 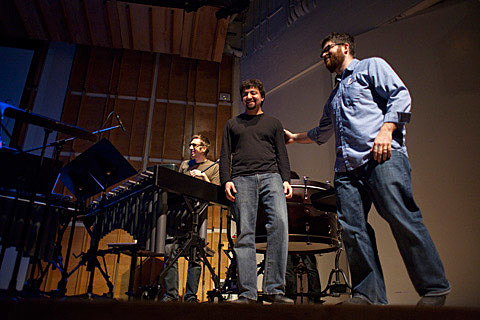 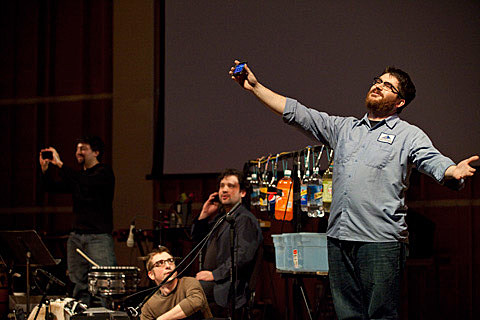 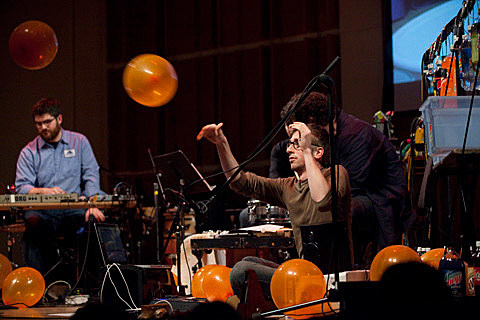 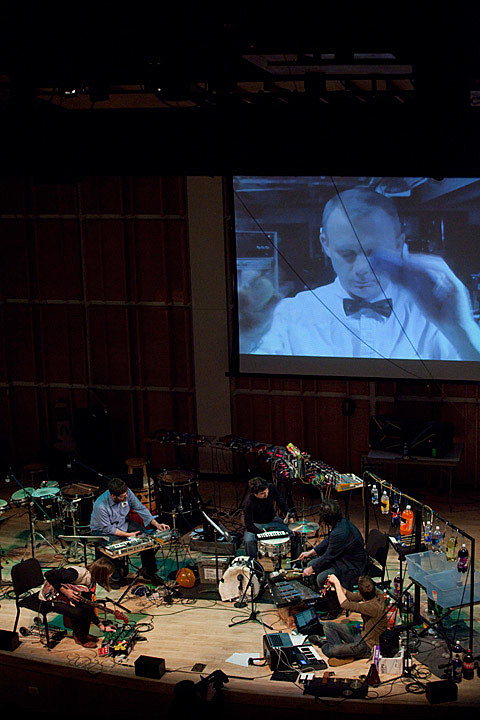