Stars at Littlefield in 2010 (more by Dominick Mastrangelo) 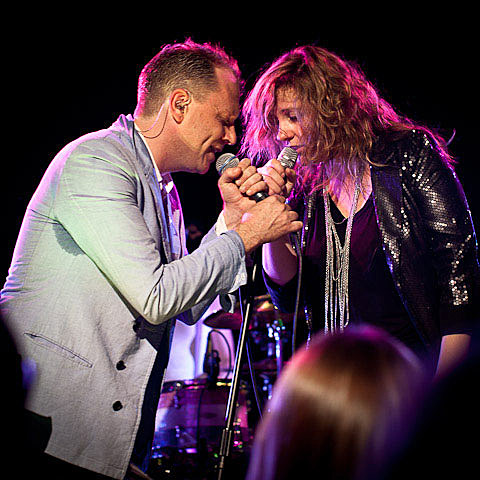 Stars have announced a short run of US dates this October. The dates kick off in Brooklyn on October 10 at Music Hall of Williamsburg. Tickets go on sale Friday (7/29) at noon. All dates, mostly in Florida, are listed below.

Stars have recently released The Bedroom Demos, an album of demos from their In Our Bedroom After the War album. According to Arts & Crafts:

"THE BEDROOM DEMOS" are the heart and soul of STARS' revered 2007 record 'In Our Bedroom After The War'... the real and honest bones of the album, before it was an album.

Fresh from touring the world with their breakout record 'Set Yourself On Fire', STARS hit their Montreal studio with Jace Lasek from The Besnard Lakes at the controls, and tracked a slew of new songs, live off the floor. Rough, unpolished and unfinished, these versions nevertheless give a secret glance into the world of their stellar songwriting, from a helter skelter 'Take Me To The Riot' to the definitive, single microphone recording of 'Barricade'. If you have loved a STARS song, you deserve to love 'The Bedroom Demos'

You can purchase and stream the MP3 album on Stars' website.

Speaking of Arts & Crafts, Dan Mangan has announced that:

"The new album is called Oh Fortune. It includes eleven songs. I thought of the title after reading about Gertrude Ederle, a female swimmer who swam the English Channel in the 1920s and crushed the previous world record (held, of course, by a man). She was a massive celebrity for but a moment, and they threw a momentous ticker-tape parade on her return to New York. Neat, hey?

The album will be released on September 27th on a fine label called Arts & Crafts and I must admit, I'm anxious to hear what you think of it. We like it, but, admittedly, it's an unbiased opinion. A-hem."

Dan Mangan has a bunch of upcoming shows scheduled, but only one in the United States and that happens at Mercury Lounge TONIGHT (7/26).

All tour dates and the NSFW Stars video for "Changes" below...