D'Angelo at The Apollo (via Chris Rob) 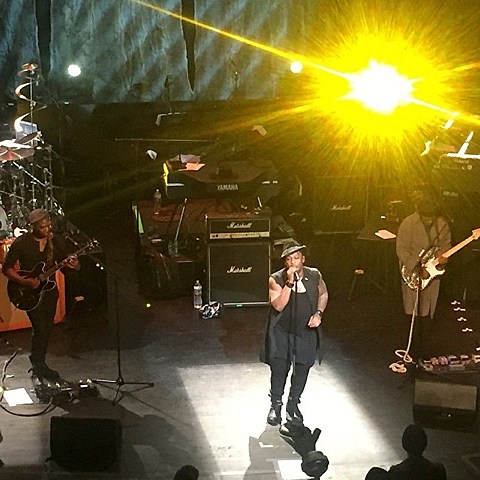 There is an unsteadiness at times on "Black Messiah," with the richness of the arrangements sometimes acting as a distraction. This album is both D'Angelo's most resolute and also the one that gets away from him the most.

That was true at this show, too, his first in this country since the album's release. (He is also, as it happens, a former Apollo Amateur Night winner.) From the beginning, with the back-to-back pairing of "Prayer" and "1000 Deaths" from the new album, the grooves were murky and insular. His flexible band resisted slickness in favor of something earthier and more tensile.

Before long, he transitioned into a sumptuous run of moist love songs: "Feel Like Makin' Love" into "Really Love," in which D'Angelo showed off his upper register, into "One Mo'Gin." His voice was scratchy and limber, full of Wilson Pickett shrieks and James Brown percussive stabs and Smokey Robinson tenderness. [NY Times]

D'Angelo played his first US show since the release of his long-awaited third album, Black Messiah, at NYC's historic Apollo Theater on Saturday (2/7). He and his band played plenty of the new album, plus a handful of favorites from 1995's Brown Sugar and 2000's Voodoo , including a 14-minute version of "Untitled (How Does It Feel)" from the latter, which you can watch an HD video of (via Okayplayer) below.

The show sold out very quick and tickets were going for extremely high prices on StubHub. Were you one of the lucky ones that got in? What did you think?

That video, and D'Angelo's full setlist, below...

Encore:
Lady
Back to the Future (Part I & II )
Left & Right
Chicken Grease

Encore 2:
Till It's Done (TUTU)
Untitled (How Does It Feel)