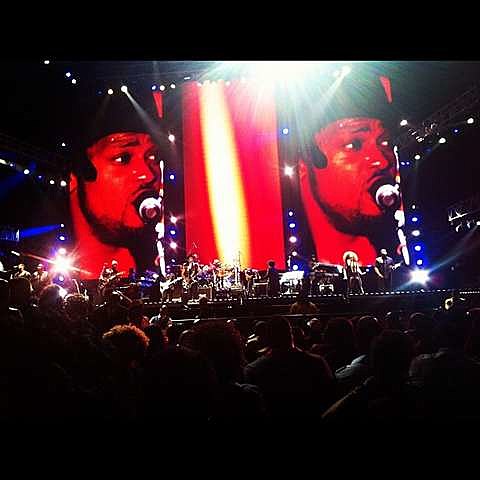 R&B great D'Angelo, who has been virtually absent from the music scene since the release of his towering 2000 LP, Voodoo, has been making a pretty remarkable comeback this year. His much-delayed new album (working title James River) may finally be seeing a release this year. GQ did a long profile on him, in which it's mentioned that a September release is possible but nothing definite. Questlove spoke to Pitchfork about the album at the end of last year, and here's what he said about the singer's plans for 2012:

He goes to Europe in January. The album is pretty much 97% done. He's just finishing his lyrics now. He needs somebody to smack him and take the record away from him because it's pretty much finished. But I know he must turn this record in like three days before Christmas and that his first show is in Europe, and that he's going to do a whole bunch. They even named it the Occupy Music Tour, so I know they're serious about it.

For all intents and purposes, this album is the black version of [The Beach Boys'] Smile-- at best, it will go down in the Smile/There's a Riot Goin' On/Miles Davis' On the Corner category. That's what I'm hoping for. There's stuff on there I was amazed at, like new music patches [keyboard sounds] I've never heard before. I'd ask him, "What kind of keyboard is that?" I thought it was some old vintage thing. But he builds his own patches.

As mentioned in the above quote, D'Angelo did in fact tour Europe this past January. He played his first US show in 12 years with a surprise performance at Bonnaroo Day 4 (6/10) as a guest during Questlove's set. A video of that is below. D'Angelo's first scheduled US performance since his absence from the stage went down this past weekend (7/6) at New Orleans' Essence Music Fest. A video from that is below too.

After Essence, he made his way over to the Netherlands for North Sea Jazz Festival, which Janelle Monae was also at, and was tweeting about his set. She wrote "D'Angelo Left us . Came back and STILL sounded better,played better than these fools," and "As a d'Angelo fan.didn't come expecting anything cept growth, energy, dynamic voice, funk, soul, musicianship! Inspiration! got that & more."

As mentioned, D'Angelo will be in Philly for Jay-Z's Made In America Festival (9/1 - 9/2), and now he's announced a tour with Mary J. Blige and Melanie Fiona leading up to that festival, which includes two NYC area dates: August 18 at Jones Beach Theater and August 23 at PNC Bank Arts Center. TIckets for those shows are on sale now. Only three other dates on the tour have been announced at the moment, but Rolling Stone reports that it will be a 20-date tour.

A list of all currently known dates and videos below...

Questlove ft. D'Angelo - "She Came In Through the Bathroom Window" at Bonnaroo

D'Angelo - "Untitled (How Does It Feel)" at Essence Music Festival