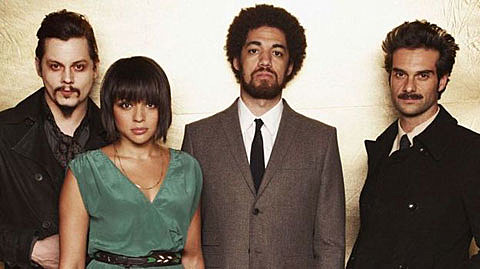 As previously talked about,

"The long-anticipated brainchild of producer-composer Danger Mouse and Italian composer Daniele Luppi, Rome benefits from a bit of context. More than five years in the making, the project assembles many of the surviving performers of classic '60s and '70s Ennio Morricone scores -- and, in half a dozen memorable cases, pairs them up with the vocals of Norah Jones or The White Stripes' Jack White."
[stream the whole new album @ NPR]

In related news, "Jack White has contributed to a new project spearheaded by Bob Dylan that pays tribute to Hank Williams."

"I did a project with Bob Dylan: he put together 20 or 25 people to finish writing Hank Williams songs that only had lyrics and didn't have music ... I had to write music for Hank Williams' lyrics," White said. "I looked through all the piles of lyrics, and one of 'em just kept speaking to me. Sometimes you think it's gonna be really hard to find my spot, and then it picks it for you. You don't even have to choose it; it just picks it for you."

In related to that news, Steve Earle's new album also pays tribute to Hank Williams. He played Leno last night, but that video is a pain to get to work, but you can watch one of him covering "I'll Never Get Out of This World Alive" recently in Seattle, below...