The Vander Ende-Onderdonk House in Ridgewood 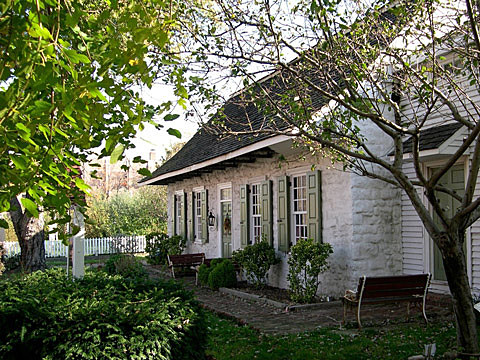 A pair of impressively bearded frontmen will bless the backyard of the Vander Ende-Onderdonk House today at 6PM (8/10): Daniel Higgs (Lungfish) and Tim Harrington (Les Savy Fav)! Donations for the BYOB show will be accepted, and the party goes down rain or shine... note there is a "huge circus tent on the property". It's located at 1820 Flushing Avenue which isn't too far from the Jefferson L stop. More info on the show is here.

If you haven't heard of the space, I guess that means you haven't been paying attention for few hundred years:

The Vander Ende-Onderdonk House, located in Ridgewood on the border of Queens and Brooklyn, is the oldest Dutch Colonial stone house in New York City. Peter Stuyvesant granted the land it sits on in the mid-seventeenth century, and by 1660, Hendrick Barents Smidt occupied a small house on the site. In 1709, Paulus Vander Ende of Flatbush purchased the farm and began construction of the current house. The building was a prominent marker in the 1769 settlement of the boundary dispute between Bushwick in Kings County and Newtown in Queens County.

In 1977, the House and property were listed on the National Register of Historic Places, and in 1978, granted the same status on the New York State Register. The House was given New York City landmark status in June of 1996. With the help of Federal, State and local funds, the Onderdonk House was opened to the public in 1982.

The House serves as a museum for a permanent exhibit on the archaeology of the Onderdonk site, as well as changing exhibits relating to history, the arts and culture. The Society also maintains a history and genealogical research library, and offers many cultural events annually, including: guided house tours, history lectures and programs, genealogy workshops, craft classes and special events, such as St. Nicholas Day and other Dutch celebrations. The history and location of the house provide a rich educational and cultural experience for visitors.

OK to be fair, there hasn't been any indie-rock events there prior to last weekend's Arbitration Rock Festival. So head on down to the historical house and help break it in (nicely)!