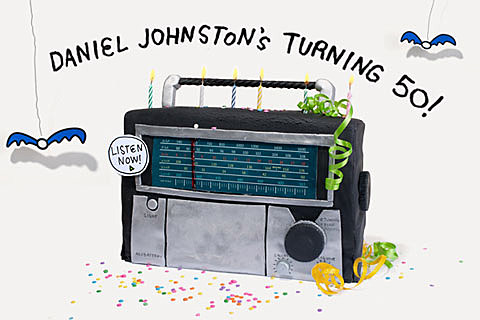 The brilliant, controversial, legendary and much-covered 'outsider' folk musician (and visual artist) Daniel Johnston is turning 50 years old on January 22nd, and those closest to him are helping him celebrate with the launch of new projects including a call-in number where anyone can leave Daniel a 'Happy Birthday' message.

Call (936) 463-4688 now to hear a message from Daniel and to record your greeting. People are encouraged to "tell a story, sing Daniel a song, cover one of his songs, or anything else that lets Daniel, and his fans, know how much he means to you and to the world of music. Throw on a party hat if you got one, and leave any message you want. Any length you want. Anything goes."

Daniel will get all the messages, and most of them will air along with special musician guest messages, on a 50th birthday show happening on the new Daniel Johnston Radio (Radio.hihowareyou.com) on January 22nd at 8pm CT. The live birthday show will also include Daniel's music and stories from the man himself.

In addition to the birthday hotline and radio station, Daniel is also about to release his first-ever comic book. "Through Kickstarter.com, Daniel will raise money to publish a limited run of the comic book he's always wanted to make, titled Daniel Johnston's Infinite Comic Book of Musical Greatness. The comic will also exist online complete with music and interactive elements which will take Daniel's vision to a whole new dimension." Stay tuned for the direct Kickstarter link UPDATE: It is live.

Besides a 2pm on 1/22 birthday appearance at the famous "Hi, How Are You?" wall in Austin (which you'll hear about if you call the number), Daniel has no upcoming live shows announced, but he did just play a 50th birthday celebration at Fitzgerald's in Houston, Texas on 1/14. Videos from that show ("Happy Birthday" included) are below...