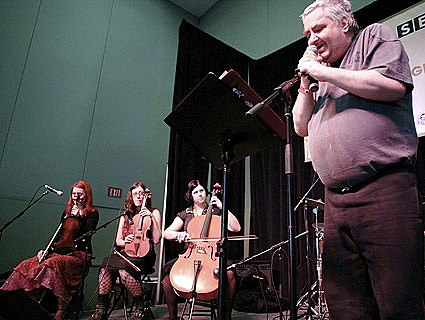 Daniel Johnston played SXSW this year. I was there, but I never saw him. Though I was pretty excited Daniel was playing, I didn't even make a serious effort to see him when I got there. I never checked to see exactly how many shows he was playing, but I knew I'd have to ditch my own day show to see him one time, and that another one of his shows was in the convention center (aka I wasn't getting in without a badge).

Sunday night over dinner I was telling a friend from Austin how disappointed I was - if only I had planned more maybe I could have caught him. My friend asked if I had heard about Daniel's recent interest in anti-semitism and Nazis. I said I hadn't. He said it was true. I said I guess I didn't regret missing him as much anymore. Neither of us had heard anything about how the SXSW shows went.

Today I did a search, and it looks like not only is it true, but it surfaced in Daniel's act at SXSW too. Here's an interesting review:

1. “I heard they just sentenced a man to the death penalty… for trying to commit suicide.”

2. “I heard the Jews are having a pajama party… at the concentration camp.”

Daniel punctuated the last one, which drew a pretty uncomfortable silence, with a Nazi salute and a screechy “Heil Hitler.” [scan]

Further confirmation at The Mercury News and at James Hill's blog.

Can you blame Daniel for anything he says? His mental illness is well documented. Is it just for shock value? As usual, I don't know, but I don't really like it. I guess I'd need to know more about the context before rushing to judgement, but either way I say he drops it.

I wonder if David Bowie knows. Then again, is the Highline Festival even really happening? The website still says "coming May 2007". hmm.