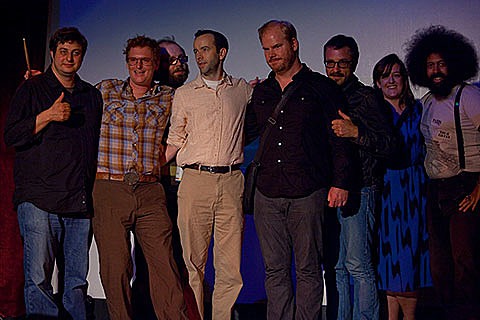 People like Patton Oswalt, Todd Barry, Kumail Nanjiani and Joe Mande are part of a personal roster of active comedians who keep my zeal for classic stand-up alive. I like the short trip from set-up to punchline and the volume of material that can be crammed into a set, whether it be 10 minutes or an hour. But as a 33 year old with the soul of a 65 year old, I have found myself gravitating towards the art of the monologue lately. And I don't mean the banal current events-based late-night talk show opening garbage. I am talking about long-form storytelling with a central theme that has many diversions and hilarious detours throughout the journey. Mike Birbiglia, a longtime favorite of mine, has evolved from a pretty standard (and prodigal) stand-up comic to an expert monologist. His epic one man show Sleepwalk With Me was my first taste of his stunning evolution. Then a few weeks ago I watched him workshop a new one man show called My Girlfriend's Boyfriend (an unfortunate title as Alyssa Milano recently starred in a movie of the same name. It probably sucked). I also just read his wonderful new book Sleepwalk with Me: and Other Painfully True Stories. He's my generation's Spalding Gray, and, man, we definitely need that.

My favorite living story teller in the entire universe, though, is Daniel Kitson. He's British. Americans are simply not afforded enough opportunities to bask in this man's genius, and that sucks. But it makes sense. He lives in Britain. Not America. When he does get here (for The Eugene Mirman Comedy Festival, for example), he sells rooms right the funk out. Good for him, bad for us because a sell out surely means some people aren't witnessing the force that is Daniel Kitson. Luckily for us, St. Ann's Warehouse is hosting a whopping 22 show run of Daniel's tale The Interminable Suicide of Gregory Church from January 6th to January 30th. From St. Ann's website:

The show to see at the 2009 Edinburgh Fringe Festival, British Stand up comedian and storyteller, Daniel Kitson, brings the story of Gregory Church to St. Ann's Warehouse for its American Premiere.

Gregory had fifty seven letters to write. He'd never written that many letters, not in one go. In fact, he'd never written a single letter and it was taking significantly longer than he'd anticipated. He'd started, full of optimism, curiously enough, at 9 am and now here he was 8 hours later half way through letter twenty four. He glanced at his watch and then at the noose hanging over his head.

Had he known how long suicide letters take, he thought, he wouldn't have cancelled the milk for the morning.

A story of a death postponed by life.

To give you a better picture, you can read some reviews here and here. If you've never seen Kitson, this is your chance to see him in his purest form.

And, hey, since you have your wallet out, why not buy a ticket or two to 1 of 7 Jim Gaffigan shows happening at the Best Buy Theater. I don't know how many shows he had scheduled there initially, but it definitely wasn't 7. To be honest I have never paid more than $5 to see Jim Gaffigan. As a matter of fact, I've never headed out to a comedy show with the intention of seeing Jim Gaffigan. Jim Gaffigan just likes to test his material out in tiny rooms all over the city, unannounced. So if you can't swing these shows, go to one of the many small but incredible shows around the city. You never know.

Speaking of the Best Buy Theater, did you get your tickets to one of Tim and Eric's two appearances at the Best Buy Theater on November 27th? Some people will probably be lame and still be their families for Thanksgiving that weekend. For those of us who aren't, the night belongs to us.

Klaus Kinski favorite Tig Notaro is working on something that I am not at liberty to mention and she needs your help. She and her comedian friends are coming to your town! If you'd be interested in hosting a live comedy show at your house (like a BV loft party), please post a video submission on her Facebook page telling her why it should be you, where you live and how you would present the show. "From stage, lighting, promotions, audience, to where in your home you will hold the show, it's all up to you." Tig is so f-ing great and I hope you people submit! Submissions must be up by November 23rd!

Look, I am a busy man and would love to write about stuff all day and have you read it and leave hummus comments but I have bills to pay and mouths to feed. Four of them. So I leave you with this: on Tuesday November 16th, the official 30 Rock Soundtrack hit the shelves. At first I thought this seemed like sort of a lame thing for one to want to buy. But then I read the track listing and realized how many funny and amazing songs there have been on the show, especially Werewolf Bar Mitzvah and Lemon's Theme featuring Christopher Cross. Download both of those for free above. Stream the whole thing at MSN. Buy it this Saturday and get it signed by the cast who will be in attendance in a Manhattan store. Details with full tracklistling below... 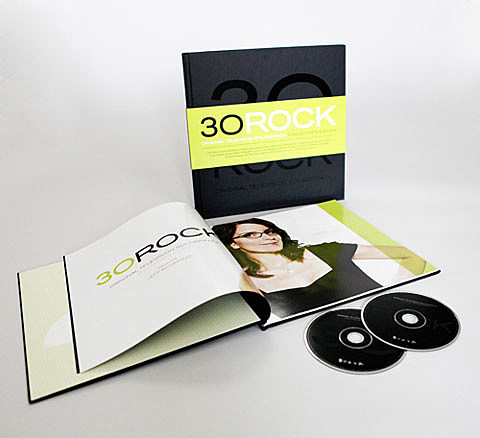 The soundtrack collection is included with a coffee table-style book that features 40 full-color pages of photos, script pages, handwritten music and liner notes from Jeff Richmond, as well as personal reflections from creator, star and executive producer Tina Fey.

---
The 30 Rock cast is doing their first EVER signing on Saturday at, you guessed it, 30 Rockefeller Plaza. Tina Fey, Jeff Richmond and members of the cast will be signing the soundtrack.