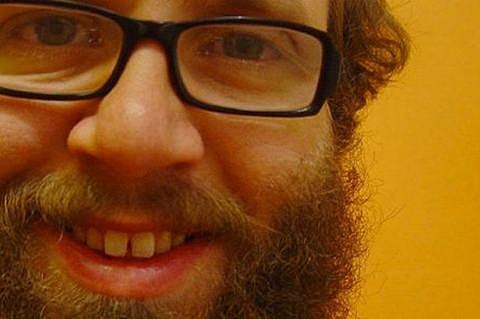 When I saw British monologuist Daniel Kitson for the first time a few years ago, I thought to myself, "That was one of the most brilliant and fulfilling comedic experiences I have ever witnessed. Too bad he's from the UK which probably reduces my chances of seeing him around NYC much in the future." And yet, as though someone somewhere in the cosmos heard my pessimistic deep-thought, since that time he's been no stranger to super long residencies in the NYC area. Back in 2011 he had a whopping 22-show residency at St. Ann's Warehouse for his show The Interminable Suicide of Gregory Church. In 2012 he had an almost month long residency at St. Ann's Warehouse called It's Always Right Now, Until it's Later. Then this past July Kitson had a 7-show residency at the Barrow Street Theater from July 7 through July 13 for a piece called Something like a Stand Up Show. So yeah, I, we, have had more than enough opportunities to get our Kitson fix over the past few years.

And now, lo and behold! He'll be back for yet another lengthy residency! This time around, Daniel Kitson will undertake a whopping will 25-show residency from November 22 - December 21 at Brooklyn's St. Ann's Warehouse. This particular residency will have Daniel unleashing his new piece entitled Analog-Ue. Details on the overall plot of the work are pretty vague (to me at least) and it's primary summary is as follows:

So, yeah. It appears to be about antiquated AV. And running. But is it, like, people running? Because when a piece of equipment is in operation, like a cassette player or a projector, we consider said equipment to be 'running.' So what does it all mean!? There's only one way to find out, and that is to experience the show first hand. Tickets for all 25 shows are currently on sale and as Daniel Kitson shows have a habit of selling out quickly and consistently I suggest getting some tix ASAP.