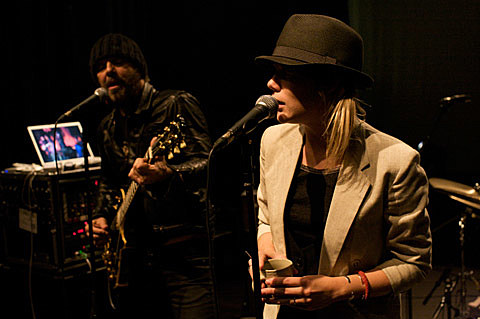 It was the official Canadian music-industry consecration of Arcade Fire at this year's edition of the Juno Awards, with the Montreal alt-rockers nabbing four trophies, more than any other artist. Arcade Fire won album of the year for "The Suburbs", group of the year, songwriter of the year ( for "Ready to Start", "We Used To Wait", and "Sprawl II"), and alternative album (also for "The Suburbs").

The Juno Awards, Canada's music awards, were doled out at a ceremony at the Air Canada Centre in Toronto Sunday (3/27) night, with the show broadcast live on the CTV Network.

Canadian rock icon Neil Young was voted artist of the year, which led him to quip on stage: "What year is this?" Young was also given, as previously announced, the Allan Waters Humanitarian Award and his moving acceptance speech was one of the highlights of the night. On Saturday night, in a non-broadcast ceremony, Young also won for adult alternative album for "Le Noise". Daniel Lanois also won as producer of the year for both "Le Noise" and his own project, the self-titled Black Dub album. -[Variety]

Lanois will head back out on the road with his Black Dub project in May and June. The newly announced set of dates inclues a NYC show at Webster Hall on 6/15 with Rocco DeLuca. Tickets go on AmEx presale at noon on Wed (3/30) with regular sale hitting on Friday.

All dates, all Junow winners and some videos below...