Danielson at Knitting Factory in 2010 (more by Ben Lozovsky) 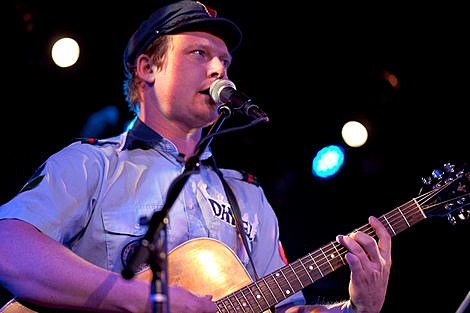 As mentioned, Jeffrey Lewis added a fourth show to his Mercury Lounge residency with Peter Stampfel, which happens this Sunday (3/31) (tickets), and before he heads out on his European tour in April, he'll play another NYC gig. This one's especially exciting because it's with Danielson Famile, who haven't played together in a pretty long time (Danielson has played without the Famile more recently though). Welcome Wagon is also on that bill and tickets are on sale now. It's one of two announced Danielson Famile dates, the other being in Philly at Union Transfer (4/15) a day earlier with Deerhoof and People Get Ready.

Daniel Smith will be DJing the Wovenhand show at Littlefield on April 12 (tickets). Wovenhand (David Eugene Edwards of 16 Horsepower) are signed to Danielson's Sounds Familyre label.

Updated Jeffrey Lewis dates are listed, along with a spotify stream of Danielson's 2006 album, Ships, below...