Danny Brown at VICELAND at SXSW 2013 (via Noisey) 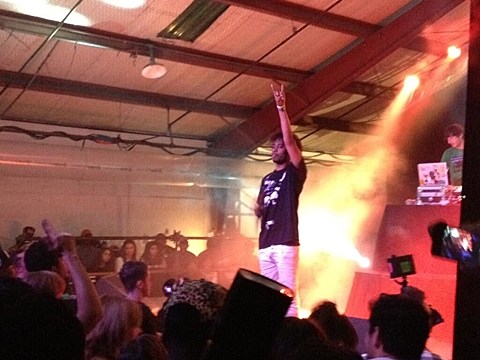 If you were down in Austin for SXSW last week, you may have caught sets by either Danny Brown or Le1f, who both did a number of shows. Now, you'll also have a chance to see those two rappers together in NYC at an intimate Red Bull Sound Select and Afropunk-presented show at Knitting Factory on Thursday (3/21). The Skins and Oxymorons are on the bill too. Advance tickets are sold out but $3.00 tickets will be available at the door with RSVP to RSVP@afropunk.com. It's first come first serve and you can start lining up at 7:30. I imagine those are going to go quick so get there early.

The show is the second in a year-long series that started with East Village Radio's Hunters show at Bowery Electric and will continue with BrooklynVegan-presented shows later in the year. Red Bull Sound Select also just presented a week's worth of shows in Austin for SXSW, including The Smashing Pumpkins on Saturday night (pics of that one are on the way).

As mentioned, Danny Brown is also going on a tour which features some dates with Baauer and others with Kitty (Pryde). That tour brings Danny back to NYC for a much larger show at Irving Plaza on May 7. Tickets for that show are still available. Danny's new album, Old, will be out at some point this year. Check out "#HottestMC" from that album, along with updated dates listed below...