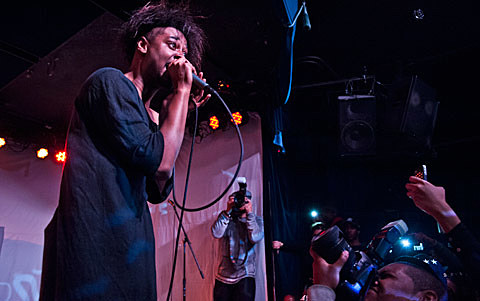 Rapper Danny Brown is inspiring retweets and making headlines for an alleged incident that took place while he was on stage in Minneapolis on Friday (4/26), as City Pages reports...

Live performance is an incredibly intimate bond between artists and fans, but that intimacy got busted worse than Danny Brown's front tooth during Friday's show on Minneapolis's West Bank. At minimum, the Detroit rapper led several fans at the sold-out Triple Rock Social Club to believe, and many proclaiming on Twitter, that they saw a female concert-goer in the front row performing oral sex on him. At max, the 18-and-up crowd witnessed something putting Brown's evening put alongside Jim Morrison's "Miami Incident."

Whether it happened or not, at least one Reddit user claims to be traumatized, and Danny's name will probably be attached to the rumor for a while. Read the rest of the article, including tweets from fans (and from Kendrick Lamar), and tourmate Kitty Pryde's take on the matter, at City Pages.

Danny and Kitty's tour hits NYC on May 7 at Irving Plaza. At the very least, we can count on it being unpredictable. Tickets for that one are still available.

Updated tour dates are listed, along with a stream of Danny Brown's "#ExpressYourself," below...