'Danny Elfman's Music from the Films of Tim Burton' 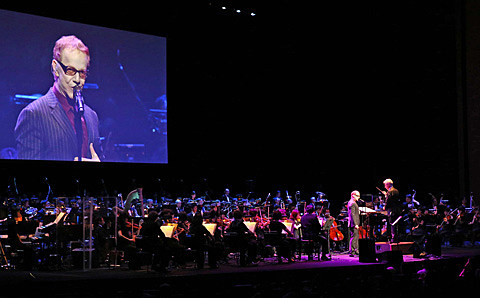 The Lincoln Center Festival celebrates it's 20th anniversary this year, running from July 6 - August 2, featuring 58 performances by artists and groups from Germany, China, England, Ireland, Russia, the United States and Japan. Festival packages are on sale now, and tickets to individual performances go on sale March 31.

The festival kicks off with "Danny Elfman's Music from the Films of Tim Burton" which will have eight performances from July 6 - 12 at Avery Fisher Hall. The onetime Oingo Boingo frontman and the filmmaker's relationship goes all the way back to Burton's first film, Pee Wee's Big Adventure, and also includes Beetlejuice, Batman, Edward Scissorhands and many more. The event description notes that "the concert is enhanced by the stunning visuals of Burton's original sketches, drawings, story boards, and film clips rendered in exquisite detail on the big screen." Elfman will appear at each performance, though he is not the conductor. The show received raves in Los Angeles when it ran in 2013. Note: audience members are encouraged to dress up as their favorite character from a Tim Burton film. It's that kind of night.

Other Lincoln Center Festival highlights include a performance by Sufjan Stevens collaborators Yarn/Wire on July 15, and the National Ballet of China and its Symphony Orchestra will perform two separate story ballets: The Peony Pavilion (July 8 - 10), a romance based on a 400-year-old epic masterpiece of Kunqu opera; and The Red Detachment of Women (July 11 & 12) which is best known as the ballet performed for President Nixon on his barrier-breaking 1972 trip to China.