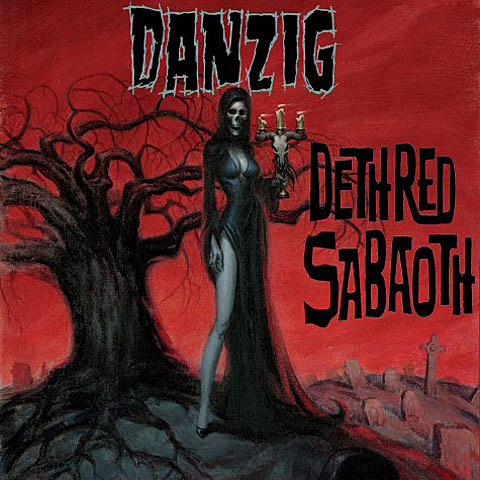 "Deth Red Sabaoth", produced by Glenn and recorded in Los Angeles over the course of 2009, will be released on June 22 via Evilive/The End Records.

The 11-track collection, penned by Danzig, is laced with Glenn's lycanthropic growls and blues-infected wailing. Tracks including "Black Candy", "The Revengeful" and "On A Wicked Night" emit a spectral glow to rival the highest points in Danzig's colossal discography. Part I of the exquisite two-part "Pyre of Souls" opens with acoustic guitar, haunting piano, Glenn's plainsong vocal, and an almost dirge-like feel; Part II explodes with electric guitars and a driving, mesmerizing cadence.

"I think that fans will really dig this new album," said Glenn. "I've been told several times that the album has a cool vitality to it, that it sounds energized, and I got that feeling when I was recording it. I wanted to have an organic sound, bigger and thicker, so I went out and bought some 1970's Kustom tuck 'n roll bass amps to play some of the guitar parts through. You'll hear real reverb, real tremolo on this album, which sounds completely different than the stuff that's done with computer chips."

Joining Glenn in the studio for the recording of "Deth Red Sabaoth" were guitarist Tommy Victor (PRONG, MINISTRY), a Danzig cohort on and off since 1996, and drummer Johnny Kelly (TYPE O NEGATIVE, SEVENTH VOID). While Kelly has toured with Glenn intermittently since 2002, this is the first time he has recorded with the band. Glenn handled the bass chores for most the album, and played drums on "Black Candy". [Blabbermouth]

Though he apparently plans to tour even more later, Danzig has announced a nine-date June tour to support the new album. Kicking of in Virginia on June 15th, he hits Nokia Theatre in NYC on June 18th (and the Troc in Philly the next day). A ticket presale (password = Revengeful) begins today/Saturday at 10am for all nine dates, which are listed below...