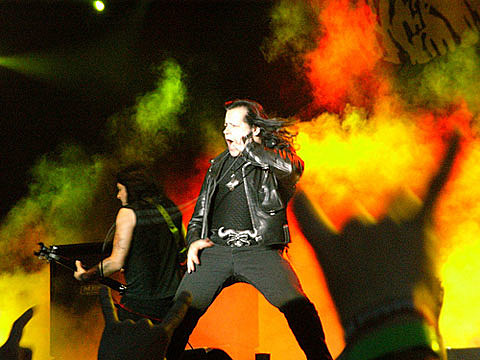 Fans can also meet Glenn Danzig at three in-store autograph signings to be held around the tour, included Saturday June 19 at Vintage Vinyl in NJ, Monday, June 21 at Newbury Comics in Boston, MA, and Thursday, June 24 at Record Exchange in Boise, Idaho. See the tour itinerary below for more information.

Danzig plans to dig deep into his career-defining catalogue and perform tracks from Danzig, Lucifuge, How the Gods Kill, and on up to the present, including several new songs from Deth Red Sabaoth. "Danzig fans have their own favorites from throughout the years," said Glenn, "and I hope the set list we put together will satisfy everyone."

Grab a new song from Deth Red Sabaoth, where Danzig returns to his roots, for free from Amazon.

Danzig's tour continues tonight (6/16) at the Fillmore in Charlotte, NC. He hits the Nokia Theatre in NYC on Friday, signs at Vintage Vinyl Saturday afternoon and then plays the Troc in Philly Saturday night. Nokia Theatre tickets are still on sale.

Danzig recently got back from Europe where his setlists included "Thirteen". He performed the song, that he wrote for Johnny Cash and which randomly appears on The Hangover soundtrack, for the first time on June 10th in Sweden. Video of that performance and all dates (including the signings), below...