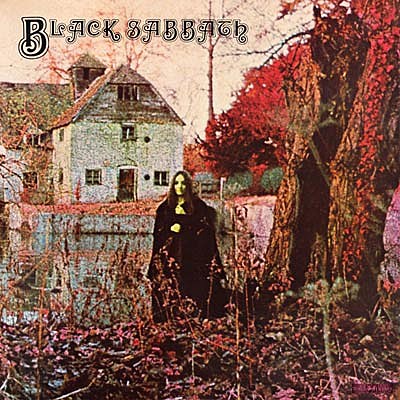 Chris Weingarten: Do you remember hearing Black Sabbath for the first time?

Glenn Danzig: Yes. I didn't even hear them before I bought the record. I was flipping through new releases at Sam Goody's and all of a sudden I see this record with a girl in the satanic robe and this dead electric forest and this BLACK SABBATH at the top and I just pulled it out and I said, "This has to be good!" It just had to. No one knew who the fuck they were at the time; it had just come out here in the States and -- as you'd say now, "buzz" -- but there was no "buzz" or talk or anything about them at all, and I brought it home, took a chance, and it was just insane. I played it over and over and called up some friends and was like, "You gotta hear this fucking record." Within like, I think, a month, everyone in my town was listening to it.

Chris Weingarten: Wow, how old were you?

Glenn Danzig: I don't know; I was young. I think this was the first band I went and saw. I was a little kid. I remember that me and my friend were at this show and we were the littlest kids there. It was oversold and the crowd was rocking back and forth so we just started punching and kicking people -- that's the kind of kids we were [laughs].

That town Danzig refers to is of course Lodi, New Jersey which is 4-5 miles (according to Google Maps) from East Rutherford, NJ where the Izod Center is located. The Izod Center, originally called Brendan Byrne Arena and then Continental Airlines Arena, wasn't even built when "Black Sabbath" came out in 1970. It opened 11 years later (1981).

Ozzy Osbourne will play some Black Sabbath songs (I assume) at the Izod Center on December 3rd, 2010, and he'll headline Madison Square Garden in NYC two days earlier (December 1st). Both shows are part of a tour, that is not Ozzfest:

OZZY OSBOURNE will return to North America for a month-long arena tour launching November 12 in Victoria, B.C. and concluding December 12 in Minneapolis. These shows--in support of his album SCREAM (Epic Records) and latest single "Life Won't Wait"--are part the of the Rock Legend's in-progress 18-month world tour on which he's earning some of the best live reviews of his career (including raves for new guitarist, Gus G). HALFORD, featuring legendary Judas Priest front man, Rob Halford, will perform on all dates. The first leg of arena dates will mark OZZY's first headlining North American tour since 2007's trek for his Black Rain album. Tickets for the Live Nation-produced tour go on sale beginning Friday, September 17.

Danzig meanwhile has also announced a tour, and this time it's not just him headlining shows that are being opened by his current and ex-bandmates' other projects. Instead it will be a new edition of his Ozzfest-like package tour called 'Blackest of the Black':

Glenn Danzig announced the highly anticipated return of his BLACKEST OF THE BLACK tour. In its latest reincarnation since 2008, the tour's lineup will feature Danzig, legendary Bay Area hell-thrashers Possessed and Swedish black metal pioneers Marduk, who are making a rare & long awaited U.S. touring appearance. Toxic Holocaust and Withered will be rounding out the five band bill. The 19-city tour kicks off on October 25th in Albuquerque, NM.

In addition to Glenn, Danzig's band for Blackest of the Black will consist of Tommy Victor (Prong, Ministry) on guitar, Steve Zing (Samhain) on bass and Bevan Davies (Danzig) on drums. Danzig is scheduled to perform at the free Red Bull Metallicross event at Pala Casino in Pala, CA on Oct. 23, on the eve of the Blackest of the Black kickoff.

"I'm excited about taking out both Possessed & Marduk as fans will get a chance to see these two bands who rarely tour the US," said Glenn. It should also be noted that Danzig hasn't played most of these markets in the past two years.

To quote BBG when he heard the lineup of openers, "that is a fucking amazing tour."

Unfortunately though, Danzig has played the NYC market more than once in the past year alone, so he will not return this time around, though there is a Buffalo show. Note also that Johnny Kelly of Type O Negative (Pete Steele RIP) is not playing drums on this tour (Bevan Davies is), and that tickets are on pre-sale NOW.

All dates for both tours below...