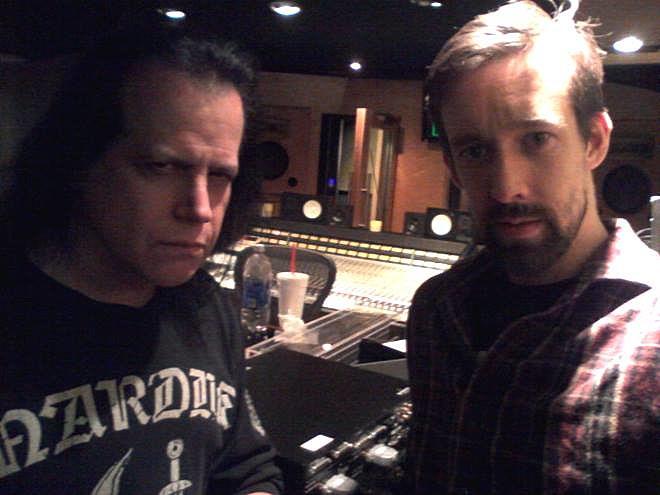 Glenn Danzig, who last year recorded a covers album that may never come out, was in the studio over the weekend working on his next effort, a collection of Elvis covers. The pic above was posted to the Danzig Facebook page with the following message:

So strange how things happen.Working in studio all this week on "Danzig sings Elvis" ep & tonight is anniversary of day Elvis died"
RIP
EAP

Eap, prap, lovp. A concrete release date hasn't been scheduled, but it's assumed the EAP EP will come out some time in 2015.

Is Danzig covering the King to blow off steam over the recent dismissal of his lawsuit v. Jerry Only? The lawsuit proposed Danzig was owed serious coin thanks to a lucrative Hot Topic deal brokered by Only that has spread Misfits-related merch far and wide (I saw a Crimson Ghost on an iPhone case. Don't look back. You can never look back). But, the presiding judge thought otherwise. According to RE-TOX:

Unfortunately, according to the judge, Danzig failed to allege which terms of the 1994 agreement Only actually breached. In the ruling, the judge notes that the merchandise provision of the 1994 agreement grants each co-owner (Danzig, Only, whoever) the "non-exclusive right to conduct merchandising and to exploit other rights relating to the use and exploitation of the name Misfits." AND that each will retain 100% of what each earns individually from exploiting these merchandising rights.

The best part: the agreement even states that neither Only nor Danzig has any obligation to pay the other person in the event one makes more money than the other.

Well, that smarts. Glenn, are you lonely tonight? At least Danzig has the higher profile concert schedule this year, playing Riot Fest and Housecore Horror Festival among other dates (as Samhain).

Check out Danzig's cover of Elvis's "Trouble" recorded in 1990 below.