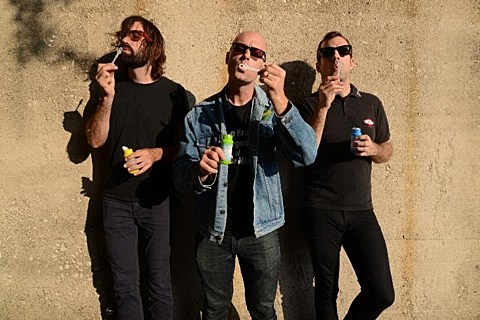 Dark Blue (mems. Clockcleaner, Paint It Black, Ceremony, etc) are releasing their debut album, Pure Reality, on October 7 via Jade Tree (pre-order), and a second track from it is premiering in this post. It's called "Hanging from a Chandelier" and is more of their punky post-punk with John Sharkey's excellent baritone at the forefront. Check it out below.

Dark Blue also have some dates coming up, including a couple Northeast dates with Australia's Dick Diver on that band's upcoming tour. That includes the Death by Audio show on September 26 (which we now know will be one of the venue's final shows) with PC Worship and Free Time. (Guerilla Toss dropped off.) After that, they'll go on a California run with Pleasure Leftists (who play NYC first too).

Speaking of PC Worship, they just revealed a collaborative project with Parquet Courts.

All Dark Blue dates are listed, with the new song stream, below...