DOWNLOAD: The National - So Far Around The Bend (MP3) 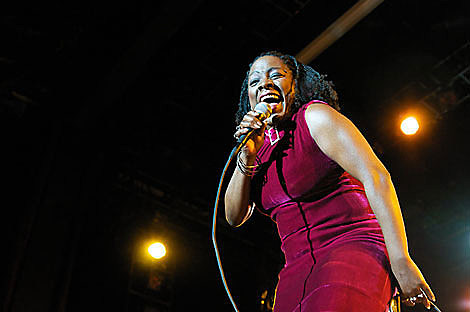 4AD is pleased to announce Dark Was The Night - Live , a concert commemorating the newest Red Hot release Dark Was The Night. The show will take place Sunday May 3 at Radio City Music Hall and will feature several of the artists that contributed to the compilation including Dave Sitek, Dirty Projectors, Feist, My Brightest Diamond, The National, Sharon Jones & The Dap Kings plus more to be announced in the coming weeks. Tickets will go on sale this Friday, March 13 at 11am 9am via Ticketmaster. Dark Was The Night - Live begins at 8pm (doors will open at 7).

Dark Was The Night was released by 4AD on February 17of 2009, and was produced by Aaron & Bryce Dessner of The National. The compilation, comprised of 31 exclusive tracks, benefits the Red Hot Organization - an international charity dedicated to raising money and awareness for HIV and AIDS through popular culture. A complete track listing for Dark Was The Night is listed below.

Tickets will also go on Am Ex and "Internet" presale on Wednesday at 9am.

Pitchfork.TV (newly redesigned) seems to be down at the moment, but also:

This week also sees the release of several videos directed by groundbreaking filmmaker Vincent Moon. Moon shot the Dark Was the Night contributors The National, Dirty Projectors and Yeasayer each performing their song from the compilation in early February. These clips will roll out, one a day starting tomorrow, March 10, premiering on Pitchfork.tv

I wonder who else they'll add to this show. Grizzly Bear should still be in town. Sufjan Stevens lives here too. David Byrne? The whole Dark Was the Night tracklist below...