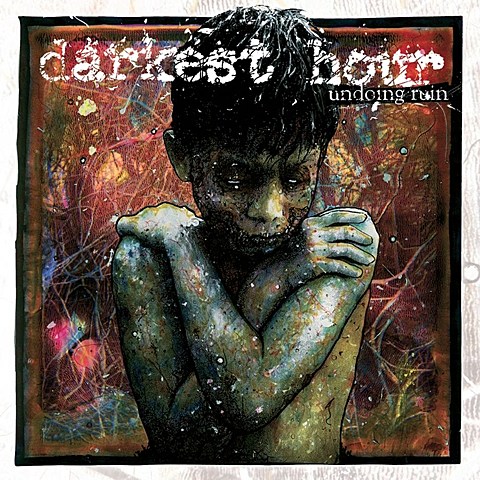 Undoing Ruin is easily Darkest Hour's best work to date. Earlier albums were often melodic yet somehow not catchy, but focused songwriting here makes the riffs memorably hooky. "With a Thousand Words to Say But One" mixes guitar tones and dramatic dynamics, while "Convalescence" and "Sound the Surrender" have epic, ringing melodies recalling Dark Tranquillity, another seminal Gothenburg band. "This Will Outlive Us" has balls-out thrash, complete with Slayer-style dive-bombing solos--more, please! (Except for some fleet-fingered runs, the solo-free ethic is basically intact) The band is tight, the album is smoothly sequenced, and there's not a duff song here. [Cosmo Lee for Stylus in 2005]

DC metalcore/melodeath band Darkest Hour are celebrating their 20th anniversary this year, and they have a lot going on in honor of that. They're releasing their 2014 self-titled LP on limited double transparent blue gatefold vinyl (pre-order), re-releasing their 2000 debut LP Mark of the Judas, and perhaps most excitingly, they're celebrating the 10th anniversary of their 2005 breakthrough record, Undoing Ruin, in full on tour this summer. And their likeminded ''00s-era Victory labelmates Dead to Fall (who broke up in 2008) are coming out of hibernation to open the tour.

The tour hits NYC on June 24 at Gramercy Theatre. TIckets for that show are on sale now. All dates are listed, with an Rdio stream of Undoing Ruin, below...