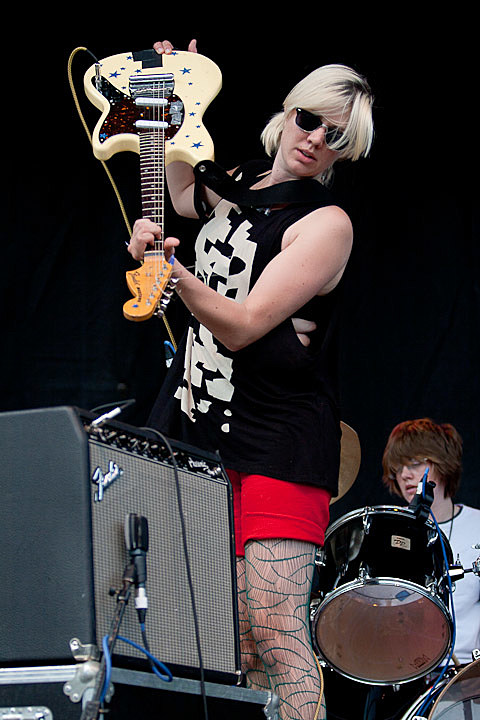 Darkstar played their first US show at Pitchfork Festival this past weekend. As mentioned, they'll be sticking around for a bit and will play in NYC tonight (7/18) at Le Poisson Rouge. Phaseone opens the show and tickets are still available. We're also giving away two tickets at our facebook.

On "Gold," the trio's cover of Human League, a distant house thump permeates, rolling alongside hi-hats and anchored by slow piano. This is the energy the crowd needs. People start wading in closer, whistling and fully embracing the music.

Clicks continue to buzz in rapid succession, and the distorted and crunchy synth found in so much of Hyperdub's output sits prominently in the mix. The lead singer looks like Brendan Fraser in Airheads, but this shouldn't make you take Darkstar any less seriously. Their February signing to Warp is big news for these Brits, a trio we'll hear more of in the future.

Speaking of bands who played Pitchfork Festival with upcoming NYC shows, Gatekeeper play on Saturday (7/23) at 285 Kent as part of their tour with Pictureplane and Teengirl Fantasy. The NYC show was originally scheduled for Coco66 but has been moved to 285 Kent. Tickets are still available.

Check out pictures from Gatekeeper and EMA's sets at Pitchfork Fest HERE.

EMA has two shows on Wednesday (7/20). She'll play an early show at Mercury Lounge with Helado Negro (tickets) and a late show at Glasslands with Talk Normal and Abblehearts (tickets). All tour dates are listed below.

Gang Gang Dance conclude their tour with a Rocks Off Concert Cruise Thursday (7/21). Nguzunguzu and Total Freedom aren't on the bill like they were for the much of the tour (Pitchfork after party included) but Nguzunguzu have their own shows this week. Here's some words about GGD's Pitchfork set:

A small man waving a stick of burning sage preceded Gang Gang Dance to the Green stage--a shaman of sorts, he stayed on stage for the entire hour, waving his sage stick or a towel and nodding along to the hyperbolic pastiche of dancehall, new age, tropicalia, electronica and Middle Eastern. It's world music gumbo, but highly danceable and about as "now" as you can get.

Lead Lizzie Bougatsos jumped off the stage to greet fans while the band continued banging out its dizzy-making tribal beats. It wasn't long before Bougatos was crowd surfing as fans reverentially passed her around the human sea. "I think when you carried me I became Jesus Christ," she said, returning to the mic. "I'm showered in your love, I'm dripping it. Drippy drippy all the way down!...If you can't act crazy on stage, there's no reason to live." Gang Gang Dance's new album Eye Contact is one of my favorites of the year so far, and live it sounds very different--much less haunted and weird, but damn good all the same. [Riverfront Times]

WU LYUF didn't play the fest, though Pitchfork probably wish they did. They share a bill with DJ Dapwell of Das Racist, who did play Pitchfork, on Saturday (7/23) at Knitting Factory. WU LYF also play the night before (7/22) at Mercury Lounge. Bass Drum of Death are on both bills.

Pitchfork Fest day one pics are HERE. Pics from the following two days are coming soon.

EMA dates and a video of Zola Jesus & EMA doing an unrehearsed cover of 'Crimson & Clover' at a pre-Pitchfork Fest show in Madison, Wisconsin, below...