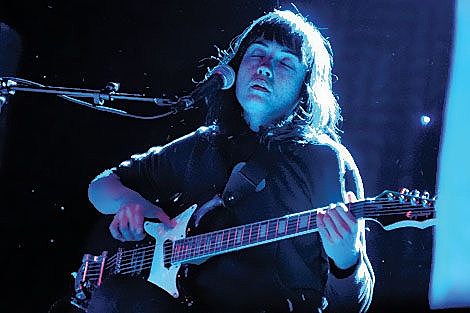 So we managed to sneak into Grouper's rare Brooklyn gig on Friday night and still aren't sure what we witnessed over the course of her main 60-minute set. (She also presented a new tape collage piece.) To be honest, the entire thing looked/sounded incredibly creepy, as if one of The Shining's redrum-happy twins suddenly learned how to sculpt dronescapes and acoustic something-or-others from an ancient keyboard and several effects pedals. It didn't help that the room was humid as hell--literally--with Issue Project Room's single, solitary fan getting switched off in the middle of the first 'song' because it was interfering with Liz Harris' signal. [self-titled]

Grouper's Friday, June 4th show at Issue Project Room was one of the events that opened the venue's Darmstadt series, which pairs new and old boundary-crossing music and art over the month of June.

Man Forever (Kid Millions from Oneida's new composition for multiple rock drummers) performs with composer/musicians Elliott Sharp, Zeena Parkins, Frank Vigroux and Hélène Breschand on June 25th. Tickets are on sale. Man Forever have a new record almost out, and the project will be touring this summer.

(Oneida has a new record, Absolute II , due too.)

Man Forever plays tonight (June 8th) at the Tank with Dump (James McNew of Yo La Tengo), M&M and the New York debut of the Sloppy Heads (who have a new Kid Milions-produced 7", First Gasp, which you can download here as a ZIP). That show has tickets on sale.

The night after Man Forever at Issue - Zs, who just put out a new record, play Issue with sound/multimedia artist David Linton (on Saturday, June 26th).

Separate from Darmstadt is the venue's ISSUE Project Room's Sunday Concerts in the Courtyard series that'll be bringing a Sunday, June 27th lineup of Omar Souleyman (who plays Central Park the day before with Tinariwen) and CSC Funk Band (featured here) to the Old American Can Factory courtyard. Tickets are on sale. The other shows in that series are posted below.

On top of all that, Issue will be participating in the two-venue, 65th-birthday celebration for improv legend Anthony Braxton (father of Tyondai from Battles) happening on June 18 and 19th. It's at (Le) Poisson Rouge on the 18th and Issue on the 19th. Details, tickets links and video are below.

The full Issue/Darmstadt schedule, video from Zs' Gulf Coast benefit show at Shea Stadium on June 2nd, and more are posted below...

"A few months ago I went to see Fireworks Ensemble perform Metal Machine Music, I read the liner notes for the show, listened to the original record and learned how the piece was originally recorded and discovered Ulrich Krieger's transcription process. During the performance I was inspired to record an album right away. A conversation I'd had a year or so ago with Brian Chase (from the YYYs) about just intonation tuning with drums popped into my head and I realized I could do something with acoustic drums inspired by the "noise" of electric instruments. I visualized a monolithic recording that would utilize the rich tonality of carefully tuned acoustic drums, played powerfully and multi-tracked at different speeds onto the Ocropolis (Oneida's Brooklyn Studio) 16 track 1" tape machine. I asked Brian Chase to come to the studio and help me tune my drums so I could capture my ambition for the piece. R ichard H offman ( Sightings) added some bass to the final mix. The tempo is something like 180BPM. The piece moves fast at an almost imperceptible rhythm. It feels overwhelming and fluctuates constantly. Turn it up!"

Wednesday June 23
This (Un)Shielded Search Sought - an evening with the ISCP
Featuring a Messaien-inspired work by artist Jen Liu plus a rare public performance of music by
G. I. Gurdjieff.

The Tri-Centric Foundation presents a two-day benefit fundraiser event celebrating the artistic legacy of composer Anthony Braxton, in honor of his 65th birthday. In addition to rare NYC appearances by Braxton himself, the two concerts will feature a host of performers who have performed with or been deeply influenced by his music, playing both their own music and Braxton compositions. All proceeds will go to benefit the Tri-Centric Foundation, a not-for-profit organization dedicated to perpetuating and realizing the most ambitious projects in the ongoing work and legacy of composer Anthony Braxton, and to cultivating and inspiring the next generation of creative artists to pursue their own visions with the kind of idealism and integrity that Braxton has demonstrated thoughout his five decade career.

- At Issue Project Roon, June 19, doors will open at 5:30, and the performance will include excerpts from Braxton's recently recorded four-act opera, Trillium E, in addition to sets featuring the recent generation of Braxton-influenced artists, including Taylor Ho Bynum, Mary Halvorson & Jessica Pavone, Chris Jonas & James Fei, Andrew Raffo Dewar, Tyshawn Sorey, and many more musicians to be announced. [Tickets to Issue show are on sale.]