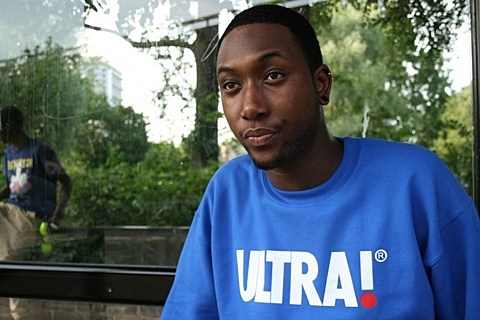 Danny Brown, who has a tour with Action Bronson on the way, is saying he'll release his new album, Old, at some point this October, and he just released a new song (that may or may not appear on the album) produced by London's Darq E Freaker. The song is called "Hand Stand," it's a real banger, and you can stream it below.

Meanwhile, Darq E Freaker will be in NYC this weekend to play Warm Up at MoMA PS1 on Saturday (8/17) with King Britt (Hyperdub), J. Cole, Bangladesh, World's Fair, Mr. Muthafuckin' eXquire, Star Eyes, and Jubilee. Tickets for Warm Up are still available.

Before Warm Up, Darq E Freaker will play a True Panther party in Brooklyn TONIGHT (8/16) at Cameo with Hyetal (who played Warm Up last weekend), Zora Jones and Throwing Shade. Tonight's party runs from 10 PM to 4 AM and admission is $5 at the door.

Then on Saturday after Warm Up, True Panther is hosting an unofficial party at Williamsburg Italian restaurant ISA's upstairs space (348 Wythe, right by Death by Audio) with some of those same names, including Hyetal and Zora Jones (who DJs b2b with Sinjin Hawke), in addition to A$AP's DJ J. Scott and Loric (of Water Borders, who played Warm Up in 2011). That one goes from 10 to 3 and is FREE.