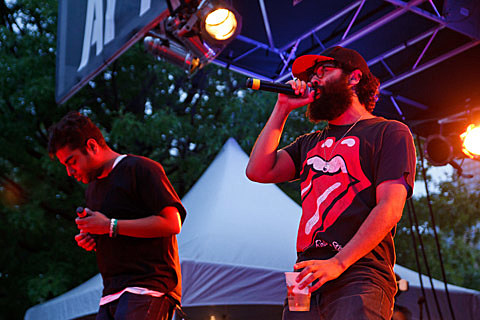 The individual members of NYC rap trio Das Racist have been playing a handful of solo shows lately and it looks like we'll be seeing more of that, as the group have decided to call it quits. Pitchfork reports that Das Racist were supposed to perform at Munich festival On3 on Saturday (12/1), but instead Heems did a solo show, and announced from the stage, "You guys wanna know the secret? Alright, so I'm going to do some Das Racist songs, but Das Racist is breaking up and we're not a band anymore."

Kool AD also tweeted, "for the record i quit das racist 2 months ago and was asked by our manager not to announce it yet. apparently @himanshu wanted to do it tho" and Heems replied, "hah dag, my bad dont even remember saying that shit."

What ended up being Das Racist's final hometown show happened at Irving Plaza in October. You can check out some videos from that show below.