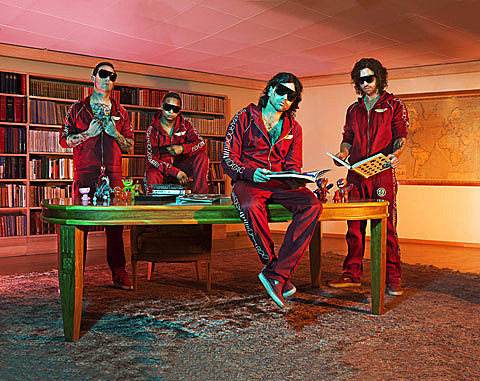 Norway's kitschy electro combo Datarock are back in the U.S. for a tour that starts with a March 7 stop at Santos and then winds its way down to SXSW. The band are also set to release "Catcher in the Rye" on March 21 which has been dubbed "The Most Extravagant Single in History." How extravagant is that exactly? Says the press release:

The single will come as a designer toy with a USB stick that features 110 tracks, 1500 photos taken at their shows in 33 countries, 20 music videos, and Never Say Die, a brand new hour-long concert film. The single will also be released as a digital 5 track EP. The USB features the EP, the new album Music For Synchronization, both of their previous albums with bonus tracks, the new Lost and Found b-sides and rarities compilation, 15 new instrumentals, and the 40 track remix album Mixed Up. The toy was created by Brian Flynn at Hybrid Design and San Francisco based pioneer company SUPER7.

Is that really considered a single? Will it be The Most Expensive USB Drive in History? No word on what this thing will set you back yet. You can, however, download "Catcher in the Rye" (which sounds a little like Matthew Wilder's  '80s hit "Break My Stride") at the top of this post and check out the video below.

The Santos show sounds pretty good, with Dinowalrus and The Suzan opening. All Datarock North American tour dates, some of which are with Dirty Ghosts, are below as well...

Datarock - Catcher in the Rye