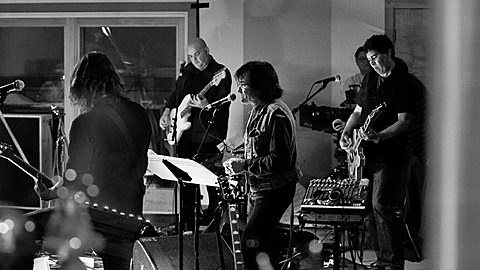 As mentioned before, the documentary about legendary recording studio Sound City is being directed by Dave Grohl and will make it's world premiere at the 2013 Sundance Film Festival. Consequence of Sound reports that Dave Grohl is also doing its soundtrack, titled Sound City - Real to Reel, which features collaborations between a crazy/amazing cast of musicians, and will include "Cut Me Some Slack," the song he did with Paul McCartney, Krist Novoselic and Pat Smear at the 12.12.12 Benefit at MSG this week.

Other collaborations include "You Can't Fix This" with Stevie Nicks; "The Man That Never Was" with Rick Springfield; and "Mantra" featuring QOTSA's Josh Homme and Trent Reznor. Other collaborators include legendary session drummer Jim Keltner, Cheap Trick's Rick Neilsen and former FEAR vocalist Lee Ving. The soundtrack is out March 12 and is available for pre-order via iTunes. Full Sound City soundtrack is below.

"Cut Me Some Slack"