Dave Hill at Outside Lands 2013 (more by Daniel Topete) 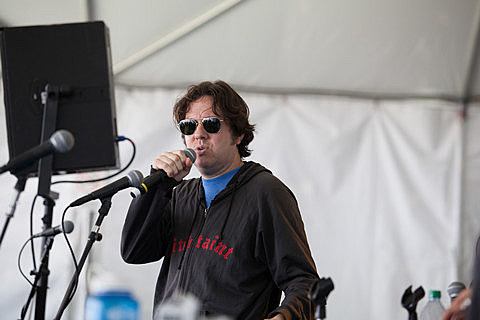 Comedian, writer, all around funny guy, and more Dave Hill released his book Tasteful Nudes last year, and as discussed, it's coming out on paperback on September 3 (pre-order). To celebrate to the paperback release, Dave will be making some appearances in North America, including a release party in Brooklyn on September 6 at Book Court (163 Court St) at 7 PM. In Dave's own words, "This is going to be an extreme literary blowout where I read, answer important questions, and then sign books and butts. Also, my rock band Valley Lodge is going to play a rare, yet still pummeling stripped down set of the hits."

He'll also be doing a reading/signing on the day of the book's release at Big Gay Ice Cream (9/3) in the West Village (61 Grove St) from 1-7 PM, and he'll appear at Manhttan's Housing Works Book store at 7:30 that day. All upcoming appearances are listed below.

Meanwhile, like he did for us at Firefly and Outside Lands, Dave Hill will return to the Soundwave stage to co-host two hours of BrooklynVegan-produced activities each day at Bumbershoot this year. Come by, say hi, get an autograph. Stay tuned for more details.

All dates are listed, along with the trailer video for the paperback release, below...