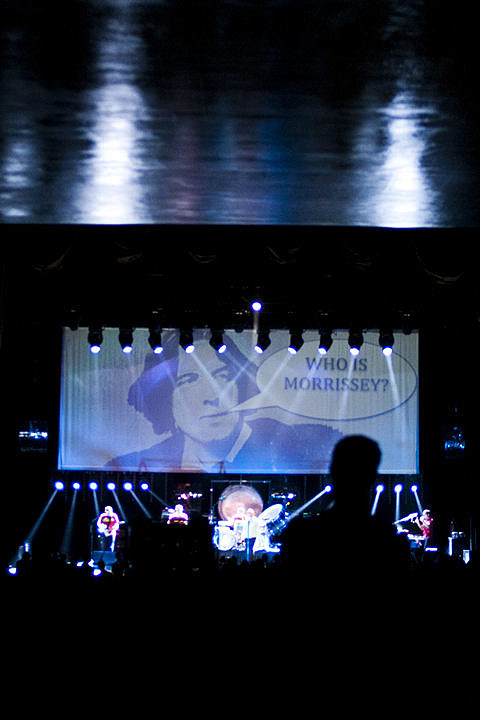 We already ran photos of Morrissey's Radio City Music Hall appearance on Wednesday (10/10) and you can see more of Chris La Putt shots here. But we asked Moz superfan Dave Hill (who has hosted Smiths Speed Dating before) to review the show for us and his fully-clothed report follows...

Wednesday night I saw Morrissey at Radio City Music Hall here in New York City. A lot of people think they like and/or "get" Morrissey as much as I do but they are wrong. This was my (insert number of times you or anyone you know has ever seen Morrissey and then add at least one)-th time seeing Morrissey live and I was pretty excited about it because every time I see him he ends up singing all of the songs directly to me no matter where I'm sitting. Somehow he just knows.

Kristeen Young, one of Morrissey's favorites, opened the show but I missed her because they took forever getting my order right at Burger Heaven around the corner so I was a little late. When I got to Radio City and showed the usher my ticket he was like "Wow- this the best seat!"

Then the usher pushed a bunch of people out of the way, throwing some of them to the ground even, and showed me to my seat which was basically on stage with the band. As soon as I got settled, Morrissey and his band walked out, which was awesome. Morrissey's band all wore matching T-shirts that said "killjoy" on them, which was crazy and confusing but whatever. Everyone in his band has short hair and look like they do crunches a lot except for the guitarist Boz Boorer, who looks like he does whatever the opposite of crunches are but he is so awesome it's like fuck it.

Once everyone had their instruments on, the entire band including Morrissey seemed to look at me briefly as if to ask "Should we start?" Of course, I was like "Fuck yeah!" so they launched into "Last Night I Dreamt Somebody Loved Me" by The Smiths, Morrissey's old band who are basically the best ever, even better than Def Leppard. Also, Morrissey had on a sort of light teal shirt, which looked great and really complimented the cool outfit I was wearing. 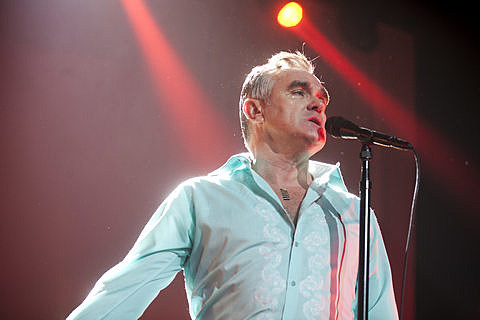 After Morrissey finished singing the first song, a big picture of me with a word bubble asking "Who Is Morrissey?" was projected on the big screen behind the band. It was a nice touch, but totally unnecessary. I was just happy to be there so that was totally above and beyond.

The rest of Morrissey's set list consisted of about 1/3 Smiths songs, a bunch of his solo songs, and a sweet Frankie Valli cover. Given the fact that between the Smiths and his solo material Morrissey has about a bazillion hits, there were times when I was thinking "Hey, Morrissey, maybe you should play more of those songs, you know, mine and everyone else's favorites (though mostly mine)" but I realize that this is my own problem and not Morrissey's and I'm sorry for even bringing it up.

During the song "Meat is Murder" (by the Smiths, duh), they played scenes from the meat-based documentary Meet Your Meat. I saw Motley Crue a couple years ago in Columbus, Ohio and they had a bunch of video projections going too, but this stuff was really, really different from that. It featured a bunch of cows and chickens and stuff being tortured and it was really upsetting and would not have worked with "Girls, Girls, Girls" or really any Motley Crue song I can think of right now. At one point, they even showed a bull getting his nuts cut off. Fuck. I have no idea what they were selling at the Radio City concession stands, but I can't help but think sales must have really taken a hit after that song. Also, it should be noted that the original "Meet Your Meat" documentary is narrated by Alec Baldwin even though everyone knows that guy loves chicken wings so much it's actually kind of weird.

Morrissey wore a total of four different awesome shirts over the course of the night. Toward the end of the show, he ripped off the third shirt of the night. Even as I type this, I still can't decide which one of us works out more, but it was still great. After he put on his fourth shirt of the night, Morrissey and his band came back on stage and played one encore, "Still Ill", one of my favorite songs by the Smiths (mentioned earlier) and then I levitated over the entire audience and went home in a cab that the driver didn't even end up charging me for. I kind of wish Morrissey would have played like nine more songs but, again, this is my own hangup mostly.

Speaking of the Smiths, there are a lot of rumors flying around that they are reuniting next year. I would like to confirm that these rumors are, in fact, true. However, the Smiths will be reuniting for one show only, which will take place in my apartment and will be attended by just me and maybe like six of my friends. Sorry.

Morrissey plays tonight (10/12) and Saturday (10/13) at Terminal 5. Both shows are sold out. Check out more pictures and the setlist from Radio City.

And pick up a copy of Dave Hill's book Tasteful Nudes now!