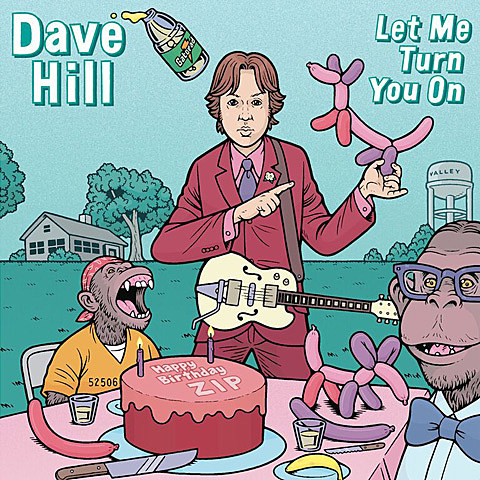 Hello. This is your man Dave Hill with an announcement of global importance. On Tuesday, June 9, my debut comedy album Let Me Turn You On will be unleashed on an unsuspecting public by aspecialthing records, a reputable label if there ever was one. As you can probably imagine, I am very excited about this as it is the culmination of nearly ten years of performing live comedy in dank basements, juke joints, convalescent homes, and correctional facilities all over the world. And while, sure, the sex has been incredible, it also feels good to have some of my live comedy work be released both in the popular CD format and on iTunes, which is why I write to you today. Whether you need a good laugh or would just like a better understanding of why I have never once appeared on network television (I have, however, appeared on basic and premium cable many, many times. Let me be clear on this, everyone I went to high school with! Haha. Ha.), I encourage you to go ahead and pre-order your copy of my incredible album today. It is full of "jokes", anecdotes, stories, and other theoretically humorous observations from a life lived to the best of my abilities for the most part. I also rip a couple sweet guitar solos here and there because I can. It is a really great album to listen to while enjoying a killer workout, participating in medical experiments, or just sitting there eating a corn dog or something probably. I don't even know. You'll figure it out. And as if all of that is not enough, the cover art is by the great Danny Hellman, one of my favorite artists ever.

Dave Hill will be celebrating the release of Let Me Turn You on at The Bell House on June 9 with guests Michelle Wolf, Daniel Koren, Greg Barris, Seaton Smith and more. Tickets are on sale now.

Before that, Dave is a part of the "Comedy Tribute to Devo" at Littlefield on Thursday (5/28) that also features Devo's Gerald Casale, Sara Benincasa, Liam McEneaney, Joe Garden, Fort Lean and "special guests." Tickets are still available. Dave says he's "gonna do a song, not sure which one yet. I might rip a sweet solo or two also."

You can also get a dose of Dave via WFMU's The Goddamn Dave Hill Show which airs every Monday from 9 PM - midnight, Eastern time. Dave's got a few other live dates as well, and all are listed below.