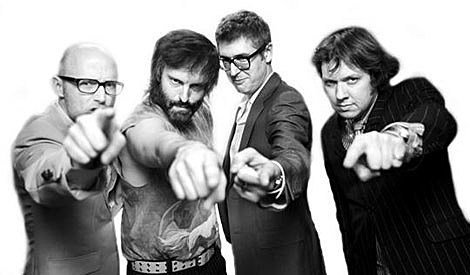 The next installment of the Dave Hill Explosion is happening at the UCB Theater on Thursday 10/16/08 at 9:30pm. Dave might want to consider moving the show to Burger King because it sure is gonna be a whopper*. His guests this week include Moby, Walter Schreifels (Gorilla Biscuits, Quicksand, Rival Schools) as well as guitar hero Doug Gillard (Guided By Voices, Richard Buckner, the Oranges Band, Cobra Verde). Add to the mix Dave's own comedy, performance, and videos, and you've got a show so overwhelming your health may be in jeopardy. And tickets are only $5.

Doug was seen enjoying Robert Pollard's band The Boston Spaceships at the Highline Ballroom on 10/1. If you missed him there and end up missing the Explosion, fear not. You can see him and his full band at the Alphabet Lounge on 10/22 at 7:45pm and then later that night at Southpaw, also with a full band. The Southpaw show is billed as Reef Madness: The Surfrider Foundations NYC Annual Funraiser. They save our reefs. More info on that here

And in case you missed it, Moby appeared at a Rock & Rescue Benefit on October 6th at the Highline Ballroom. And in case you miss the Explosion, keep in mind that Moby's doing a DJ set at Le Royale on 10/22 as part of some CMJ Week party AND Moby's band The Little Death NYC is playing a different CMJ show at Public Assembly in Brooklyn on 10/23.

Video of Rufus Wainwright and Dick Cavett at a past Dave Hill Explosion below...