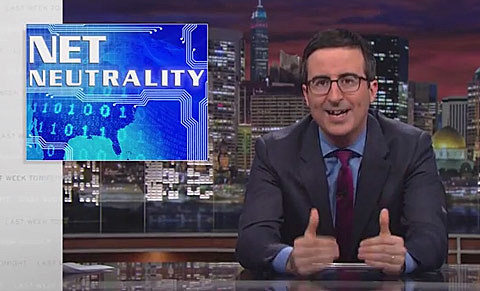 Last Week Tonight With John Oliver is about a month old at this point, with the former Daily Show correspondent (and guest-anchor)'s move to HBO. The pay-cable network not only allows for no language restrictions, but also longer form pieces as well, that allow Oliver and his writers to go a little more in depth. The show had its first viral moment this past Sunday with its 13-minute segment on the possible changes to the FCC's "Net Neutrality" regulations that could allow cable providers to offer different speeds to certain corporate clients. While being very funny, Oliver consisely explained Net Neutrality, noting they were "the only two words promising more boredom than 'Featuring Sting.'" He then urged the internet commenters to let the FCC know what they think of the proposed changes by going to the FCC's website that allows a 120-day public comment period. So many people did just that, and it crashed the FCC's servers (though it's working now). If you haven't seen the piece you can watch it below.

If you've watched Last Week Tonight With John Oliver, you maybe have also noticed its very catchy theme music, which is actually the song "Go" by Dave Hill's band, Valley Lodge. You can watch the video for that -- which came out last summer -- below. Your next chance to catch Dave and Valley Lodge is at The Bell House on June 18 which is part of his "Meet Me in the Bathroom and Tell Me All Your Secrets" variety show that features David Cross and more. Tickets are still available.

And if you're interested in attending a taping of Last Week Tonight, tickets can be requested here. "Net Neutrality" video and Valley Lodge song below...