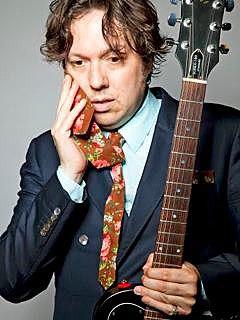 Dave Hill kicked off 2014 with the first shift on WFMU. You can stream it here. That was actually a fill-in slot for "Seven Second Delay," but he'll premiere "The Goddamned Dave Hill Show" on it's regular Tuesday 9 PM slot (old home of "The Best Show") this week (1/7).

In addition to that, Dave has a couple live performances with his band Valley Lodge. One will be at Union Hall on Friday (1/10) as part of his "Meet Me in the Bathroom and Tell Me All Your Secrets" series which started back in October. This edition, "an incredible night of comedy, music and gunplay," features Har Mar Superstar, Jackie Kashian, Cleveland indie rock legend Doug Gillard, Mike Bocchetti, Ben Lerman, Alex Edelman, and Jodi Lennon with Valley Lodge as the house band. Tickets are on sale. Dave says Har Mar and Doug will do a few songs each. Valley Lodge will also play The Rock Shop on January 17.

Speaking of Har Mar Superstar, he's got a couple shows coming up this  month. He'll headline Brooklyn Night Bazaar on January 25 with Computer Magic, Not Blood Paint, and Static Jacks also on the bill. Then on January 31 it's the next of his Free Fridays at Knitting Factory which happen at midnight.