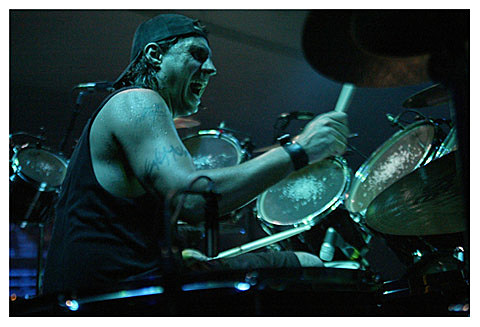 The legendary Slayer is no more, in my eyes at least. After a tumultuous dispute between drummer Dave Lombardo and the rest of the band forced him out just prior to an Australian tour, it is now official: Paul Bostaph is Slayer's new drummer (again):

Slayer's Tom Araya and Kerry King are very pleased to announce that Paul Bostaph has rejoined the band on a full-time basis. Bostaph will be behind the drum kit beginning June 4 when Slayer kicks off the first leg of its 2013 international tour in Warsaw, Poland. Gary Holt will continue to fill in for fallen guitarist Jeff Hanneman.

Bostaph and Lombardo have played flip-flop since Lombardo's inital departure after Seasons in the Abyss, and his return in late 2001 (not including a brief stint with Testament's Jon Dette). Bostaph has spent time in Testament and Exodus in the years following.

The announcement of Lombardo's replacement comes on the heels of the passing of the iconic Jeff Hanneman, who died of alcohol-related disease.